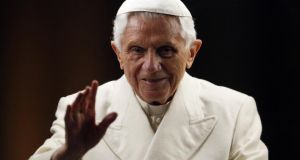 Pope Benedict: in his original essay, the then Fr Joseph Ratzinger wrote that marriage was indissoluble in the eyes of the Catholic Church. Photograph: Giampiero Sposito/Reuters

When Pope Benedict announced his surprise resignation last year, he vowed not to play an active role in church affairs under his successor. But he may now be doing just that with a revised essay from 1972, which touches on the renewed church debate on whether remarried Catholics and divorcees should be excluded from Communion.

In his original 1972 essay, Fr Joseph Ratzinger wrote that marriage was indissoluble in the eyes of the Catholic Church. If, however, a “second marriage has proven to have taken on a moral and ethical dimension” and is “lived in the spirit of the faith”, with “moral obligations” towards children and wife, then an opening of communion after a period of probation “seems to be nothing more than just and completely following the line of church tradition”.

This earlier essay has circulated again recently in church circles and has been quoted by Cardinal Walter Kasper around the recent Church Synod on the Family.

But now the essay has been redacted in the fourth volume of Benedict’s collected writings. The new version excludes the crucial final paragraphs quoted by Cardinal Kasper. Now Benedict stops short of his earlier call, arguing instead for the church to rethink existing marriage annulment procedures to allow greater leeway on dealing with remarried couples.

Church watchers suggest the redacted essay should be seen as a warning by Benedict to his little-loved German rival in the Vatican, Cardinal Kasper, who has been liberally quoting the essay to justify a more liberal church teaching on remarriage.

Fr Vincent Twomey, a former doctorate student of Joseph Ratzinger, suggested the omission was a “significant” attempt by the former pope to prevent his earlier words – written in a different context, time and role – being used against him now.

“Theologians must be free to push the boundaries, as Ratzinger was doing 42 years ago,” said Fr Twomey. “His position [now] is quite different, but his statement from then is now being given added authority through his later position as pope.”