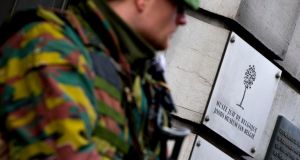 A Belgian soldier guards the entrance of the Jewish museum in central Brussels. Photograph: Yves Herman/Reuters

Police searched a number of properties in Brussels on Sunday as Belgium maintained a heightened level of security following Thursday’s terrorist raid in the eastern town of Verviers.

No arrests were made, police said, declining to give specific details of the location of the raids in the capital.

Soldiers were deployed to guard a number of sites across Belgium at the weekend .

About 150 troops were deployed on Saturday, with a further 150 expected to be mobilised later this week. The government said a decision had been taken to provide enhanced protection to “strategic sites”. Jewish schools and buildings, a number of mosques and the embassies of the US, UK and France were given added protection by the army this weekend, with about 30 troops patrolling the Jewish quarter of Antwerp.

Security was also enhanced at the EU institutions in advance of tomorrow’s meeting of foreign ministers, at which the threat of jihadism is expected to feature high on the agenda.

Meanwhile, one of the two gunmen who murdered 12 people in the offices of satirical magazine Charlie Hebdo on January 7th was buried in secret in the Paris suburb of Gennevilliers on Sunday. Chérif Kouachi’s brother, Said, was buried in the eastern city of Reims on Friday evening. Both were buried in unmarked graves under tight security.

Belgian authorities denied claims on Sunday that four suspected terrorists arrested in Athens were connected to the terrorist cell uncovered by Belgian police last week. Reports emanated from Greece over the weekend suggesting that Abdelhamid Abaaoud, the 27-year-old man suspected of being the mastermind of the terrorist cell network, was among those who had been detained by anti-terror police in the Greek capital.

Belgium is seeking extradition from France of two other suspects detained by French police close to the Italian border on Friday in connection with the suspected terrorist plot in Belgium, according to Belgian federal prosecutors.

The events last week that began with the killing of two suspected jihadists by Belgian counter-terrorism police on Thursday evening have prompted a massive counter-terrorism crackdown, prompting the government to order the army to be deployed on the streets of Belgium – the first time this has happened since a series of terrorist bombings carried out by the Communist Combatant Cells during the mid-1980s.

Belgium estimates that 335 of its people have gone to fight in Syria and Iraq in the last few years, putting it top of the list of European nations in proportion to its small population of 11 million.

On Saturday, Europol warned that the threat of terror attacks is an “urgent and very serious challenge” and a large-scale and long-term problem.

“Stopping everything is very difficult, containing the threat fully is very difficult, but I’m sure we will prevail, as we have prevailed against other forms of terrorism in the past,” Europol director Rob Wainwright told Sky News.