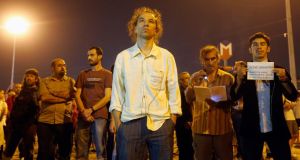 State media TRT said 25 people had been detained in the capital Ankara, 13 in Eskisehir to the west, and “many” in Turkey’s biggest city Istanbul.

Ankara’s police anti-terror department said it had no information on the reports.

Meanwhile, a Turkish man staged an eight-hour silent vigil on Istanbul’s Taksim Square, scene of violent clashes between police and anti-government protesters in recent weeks, inspiring hundreds of others to follow his lead.

Erdem Gunduz said he wanted to take a stand against police stopping demonstrations near the square, Dogan news agency reported.

He stood silently, facing the Ataturk Cultural Centre which was draped in Turkish flags and a portrait of Turkey’s founder Mustafa Kemal Ataturk, from 6 pm (3pm Irish time) yesterday.

By 2 am (11pm Irish time), when the police moved in, about 300 people had joined him. Ten people, who refused to be moved on by police, were detained. Mr Gunduz, swiftly dubbed “standing man” on social media in Turkey, inspired similar protests elsewhere in Istanbul as well as in the capital Ankara and the city of Izmir on the Aegean coast.

The silent protests were in stark contrast to demonstrations at the weekend, which saw some of the fiercest clashes so far when police fired teargas and water cannon to clear thousands from Taksim Square.

What began in May as a protest by environmentalists upset over plans to build on a park adjoining Taksim has grown into a movement against prime minister Tayyip Erdogan, presenting the greatest public challenge to his 10-year leadership.