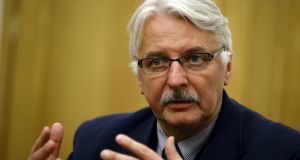 Poland’s foreign minister Witold Waszczykowski: He told ‘Bild’ his government was tackling a bias that the world was filled with “cyclists and vegetarians who push for renewable energy and fight all forms of religion”. These standpoints have “nothing to do with traditional Polish values”. Photograph: Kacper Pempel/Reuters

Poland’s foreign minister has summoned the EU’s ambassador in Warsaw for a meeting to explain what the minister termed the “megaphone diplomacy” of senior Brussels officials in the media towards Poland.

Witold Waszczykowski told Polish state radio on Tuesday he had invited the ambassador “for a friendly talk about the nature of recent pronouncements by some politicians”.

“Maybe the EU’s representative in Poland will know what kind of new procedures these are by which ‘megaphone diplomacy’ is being carried out towards Poland in the media,” said Mr Waszczykowski.

The national conservative Polish government, in power after winning an absolute majority in October’s general election, has bristled at senior EU officials’ remarks in recent days questioning its respect for the rule of law.

Of particular concern are the new government’s rapid – and critics say illegal – judicial appointments and reforms to the constitutional court, as well as an a radical overhaul of appointments at state-run media.

The Brussels executive will begin a review of “the rule of law in Poland” next Wednesday under powers granted in 2014 allowing it to investigate potential threats to the EU’s core values.

A European Commission spokesman said next week’s debate was not the start of a formal review of a potential threat but an “orientation debate” within the college of commissioners.

Pre-empting that debate, however, German EU commissioner Gunther Oettinger said on Sunday he saw “many reasons exist for us to activate the ‘Rule of Law mechanism’ and for us to place Warsaw under supervision”.

European Commission vice-president Frans Timmermans has sent two letters to Warsaw seeking clarification and reminding that a pluralist national media is important to a pluralist society. The European Broadcasting Union has urged Poland not to ratify the media Bill because the “integrity and independence of public media [is] a symbol of a free and democratic country”.

Polish government officials have dismissed these interventions, saying none of its European neighbours were concerned at what PiS saw as a lack of diversity and left-wing media bias in previous years.

Asked by Germany’s Bild daily, Mr Waszczykowski said his government was tackling a widespread bias that “assumed the world has to move in one direction: to a new mix of cultures and races, a world of cyclists and vegetarians who push for renewable energy and fight all forms of religion”.

This, he said, “has nothing to do with traditional Polish values”.