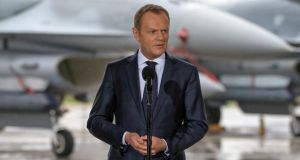 Polish prime minister Donald Tusk has called on the EU to establish an “energy union”, returning to its coal-and-steel roots to negotiate joint gas contracts with Russia.

The Ukraine crisis had made plain the need to pool purchases, suggested Mr Tusk, to reduce energy vulnerability towards dominant energy suppliers who have, in the past, raised prices and cut supply at will.

“The way to correct this market distortion is simple. Europe should confront Russia’s monopolistic position with a single European body charged with buying its gas,” wrote Mr Tusk in the Financial Times yesterday.


Co-operation
Such an energy co-operation was not without precedent, he added, pointing to the recently agreed banking union and the joint EU purchase of uranium through the Euratom atomic energy agency.

“Whether in coal, steel, uranium, credit or gas, the principal idea of the EU has always been to bring Europe together, deepening our security and establishing fair rules where the free market is lacking,” he said. “An energy union, too, would be based on solidarity and common economic interests.”

The prime minister proposed a five-stage process. First, member states would be compelled to reveal the terms of existing bilateral energy deals and agree a template for future energy contracts with involvement of the European Commission.

Then EU members would sign up to a solidarity mechanism guaranteeing mutual energy security, preventing a repeat of the 2009 stand-off between Moscow and Kiev that saw a gas supply reduction to Ukraine have a knock-on effect on Poland and other countries.

Energy transfers could be improved by using subsidies to step up construction of an inner-EU energy infrastructure, he added, while EU members must embrace new technologies to step up imports of liquefied gas from the US and Australia.

“We need to fight for a cleaner planet but we must have safe access to energy resources and jobs to finance it,” wrote Mr Tusk.

The ongoing Ukraine crisis offered a chance for the EU to return to its founding in 1952 as a coal-and-steel union. Given the ongoing energy challenge and new technologies, he said, Europe could “hardly afford not to” embrace a pooled energy policy.