French far-left leader’s tongue gets him in hot water 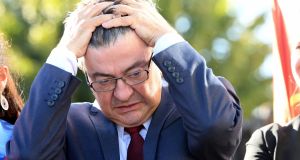 Jean-Luc Melenchon, leader of the far-left France Unbowed, who wants the European flag replaced with the flag of the United Nations. Photograph: Jean-Pierre Clatot/AFP/Getty Images

Jean-Luc Mélenchon, the leader of the far-left France Unbowed, says the blue and gold European flag is a “sectarian emblem” symbolising the EU’s Christian origins.

On taking his seat as deputy for Marseille last June, Mélenchon objected to the presence of the flag in the National Assembly. “Do we have to put up with that? It’s the French Republic here! Not the Virgin Mary!” he exclaimed.

Mélenchon has called the EU a “totalitarian project”. He wants the flag removed from the Assembly and replaced with the flag of the United Nations. But he was rebuffed twice this week, by President Emmanuel Macron, and by his fellow deputies in a heated debate.

Arsène Heitz, the French artist who designed the EU flag, was a fervent Catholic who said he was “proud that the European flag should be that of Our Lady”. He was inspired by the miraculous medal, and by the passage in the Apocalypse about “a woman clothed with the sun, and the moon under her feet, and on her head a crown of twelve stars”.

Before Mélenchon’s amendment was debated, Macron announced that he would “officially affirm that France recognises the status of the European anthem and European flag” at next week’s EU summit, “to prevent certain people from taking the European flag out of the French Assembly”.

Mélenchon was outraged. “You have no right to impose a sectarian European emblem on France,” he said, addressing Macron. “This flag is not that of France, and France voted unambiguously [in the 2005 referendum on a European constitution] against its adoption.”

In a separate dispute, Mélenchon clashed with the former prime minister Manuel Valls, after the weekly Canard enchaîné reported that Mélenchon called Valls a Nazi. “I did not say and I do not think that Valls is a Nazi,” Mélenchon tweeted. “He’s a political loser.”

Valls, now deputy for the Essonne department south of Paris, chairs a commission on independence for the overseas territory of New Caledonia. Mélenchon withdrew from the commission, citing Valls’s “proximity to the ethnic theses of the Israeli extreme right”. He referred to a photograph of Valls with Ayelet Shaked, the Israeli minister of justice and a member of the pro-settlement Jewish Home party.

Valls called Mélenchon’s statement “ignoble and outrageous”. Mélenchon replied that “Valls’s gang are completely integrated in the fachosphère and its propaganda.” Valls thanked politicians who supported him under the hashtag  #I’mFromValls’sGang#.

The name-calling culminated with Vall’s interview on Europe 1 radio station. “When I go to Israel, I meet everyone,” he said, referring to the photograph with Shaked. “But when they publish this photo and say I’m the friend of the Israeli extreme right, they want to send one message: that Manuel Valls is the friend of the Jews. They’re forgetting the new anti-Semitism. That’s where there is complacency... or they realise it, which is even more serious.”

The row with Valls comes shortly after Mélenchon picked a fight with Macron. Alluding to a demonstration organised by Mélenchon in September, Macron told CNN that “democracy is not in the street”.

Mélenchon responded with a historical tirade, claiming that “the street overthrew the kings, overthrew the Nazis, protected the Republic against the [putschist] generals in 1962.” Macron’s supporters accused Mélenchon of implicitly comparing the president to Hitler.

Though Mélenchon retains strong support among French youths, he has alienated most of the political class. France Unbowed and the Communist Party have virtually the same goals and programme, but they formed different parliamentary groups. Last May, according to the Canard enchaîné, Mélenchon sent a text to the Communist leader Pierre Laurent, saying “You are death and nothingness.”

Mélenchon and Valls spent nearly 40 years together in the Socialist Party, which Mélenchon left in 2008. “In politics, you end up paying for the accumulation of insults, crude and vulgar words,” the former finance minister Michel Sapin said. “Jean-Luc Mélenchon will end up politcially dead because he can’t control his tongue.”

Macron’s parliamentary group has called for Mélenchon to be brought before the ethics committee.