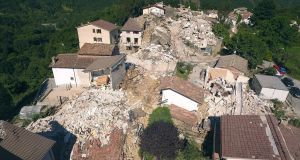 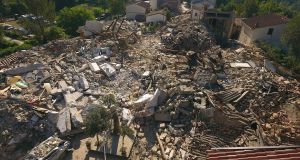 Three days after the central Italian earthquake which has so far claimed the lives of nearly 280 people, patience amongst some of the survivors is running thin.

Amatrice in Northern Lazio, the hardest hit town, where 207 people were killed, is surrounded by hills in which are nestled many tiny villages. While the numbers of dead in these villages are much smaller, the destruction is equally grave.

Saletta, just off the Salaria highway, is not so much a village as a line of houses. Fifteen people live there in the winter, rising to 45 in the summer. Twenty-two of those 45 died here on Wednesday.

A man sitting with his whole extended family around a long picnic table in a small field off the road runs at a reporter with a mobile phone who is about to photograph the scene. He is brandishing a large knife, threatening him. The phone is put away.

It is a surreal moment, but an understandable one. People are distraught. They are in the middle of a living nightmare.

Just up the road, outside the village, lies a house which looks like it is owned by an Italian Steptoe and Son. The garden in front is full of a huge variety of objects, including buckets, tins, broken TVs, garden seats, a bicycle and much else besides.

Civil Protection officials say the householder is refusing to leave his home, even though several of the houses on either side of him have collapsed.

The initial rescue work, here as in so many other of the tiny hamlets, was done almost entirely by neighbours. When the first rescue workers arrived, they found people frantically working through the rubble with their bare hands.

A CNN TV crew, which had been blocked from travelling across to Amatrice, stopped instead at Saletta early on Wednesday morning. They witnessed the harrowing nightime scene of distraught neighbours, many of them still in their pyjamas, desperately trying to dig a man out the rubble that was once his house. They had identified where he was and were trying to dig him out, pulling bricks, chairs and wardrobes off him.

As the slow digging went on, neighbours continued to talk to the man, telling him to hold on, that they would get him out. However, they had no lifting equipment and before the rescue workers and diggers arrived, he had stopped replying. Just one of the 22 dead in the short row of houses.

There were so many dead that the man’s “orto”, his carefully-curated fruit and vegetable patch, was turned into an open air mortuary. Alongside the plants lie small piles of rubber medical gloves, still there from the traumatic night.

Just outside the orto, more rescue workers are gathered around a handsome white Maremano shepherd dog. He has a flea collar, looks well-fed and is clearly delighted with all the attention.

This is no stray dog. But nobody knows where he came from.

In all probability, his master died last Wednesday and the dog is just another of those left without a home.