Over a dozen suspected Islamist militants held across Europe 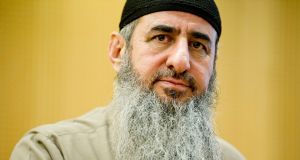 Mullah Krekar went to Norway as a refugee in 1991 and had earlier been deemed a threat to national security. Norwegian authorities did not expel him to Iraq because authorities there could not guarantee he would not be executed. Italy said it would now seek to extradite him. File photograph: Olav Nesvold/NTB scanpix

Police in six European countries arrested at least 15 suspected members of an Islamist militant group that was planning attacks in Norway and the Middle East, Italian authorities said on Thursday.

They said the militants planned to strike Norwegian and British diplomats in the Middle East and politicians in Norway, but gave no further information about the potential targets or the timeframe for any attacks.

Police in Oslo said there had never been a “concrete or acute threat” against any Norwegian citizens or interests.

The early-morning raids targeted the Rawti Shax group, which police said was a Kurdish Sunni Muslim group dedicated to overthrowing the government of Iraq’s Kurdistan region and replacing it with rule by sharia (Islamic law).

“This was an incredibly difficult and complicated investigation that has been going on for five years,” said prosecutor Franco Roberti, the head of Italy’s anti-mafia and anti-terrorism unit.

A total of 17 arrest warrants were issued, almost all for Iraqi Kurds, and 15 suspects were picked up immediately. One of those wanted was believed to be in Iraq, while it was not yet clear whether another suspect had been found in Switzerland.

All of them face international terrorism charges, the Carabinieri police said in a statement.

Among those detained was Mullah Krekar, the one-time leader of the Ansar al-Islam militant group.

He was served the arrest warrant in a prison in Norway, where he was already serving an 18-month term for making death threats against a Kurdish man and encouraging others to commit criminal acts in a TV interview.

Krekar went to Norway as a refugee in 1991 and had earlier been deemed a threat to national security. However, Norwegian authorities did not expel him to Iraq because authorities there could not guarantee he would not be executed.

Italy said it would now seek to extradite him.

Krekar’s lawyer, Brynjar Meling, told broadcaster TV2 on Thursday that his client had been in jail for all but one month since early 2012, adding that he did not have internet access.

Italian investigators say Rawti Shax, which means “The New Course”, was rooted in Europe, with cells communicating via the internet and providing logistical and financial support to send fighters to Syria and Iraq.

Their hope was that these fighters would be trained for future conflict in Iraq’s Kurdistan. “During the course of our investigation we saw some fighters leave for Syria and die in the conflict,” said Rome prosecutor Giancarlo Capaldo.

The group also went by the name Didi Nwe (Towards the Mountain), the Italian police statement said.