‘Not Bergen-Belsen again... They should leave small fry alone’

Hilde Michnia was a concentration camp guard. Her past is rearing its ugly head 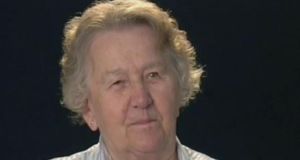 Up six steps from the front door, Hilde Michnia’s brown apartment door is decorated with a garland of white polyester roses. A black strip, reading “20*C+M+B+15” in honour of the Three Wise Men announces this Hamburg apartment is the home of a Christian woman. The 20 and 15 represent the year; and C, M and B stand for Caspar, Melchior and Balthazar or, by some accounts, Christus mansionem benedicat (May Christ bless the house).

Michnia is on the phone when I arrive, an unremarkable call to a friend dominated by talks of aches and pains, this time in her back. Nothing unusual for an elderly woman, not even for a former SS concentration camp guard.

Now, days after her 93rd birthday, public prosecutors in Hamburg are investigating Michnia’s service at Bergen-Belsen and Gross-Rosen concentration camps, in particular her alleged involvement in a death march from the latter in Nazi-occupied Poland.

“Not Bergen-Belsen again, it’s 70 years ago,” she groans. “They should leave small fry like me alone.”

But “they” aren’t leaving her alone. Hilde Michnia, born Lisiewicz, is now file number 7305 Js 1/5 with the Hamburg state prosecutor. And it was Michnia herself who set events in motion, confiding to an Irish neighbour a few years ago that she had bad dreams about her time working in Bergen-Belsen.

Slovak-born Tomi Reichental, a Bergen-Belsen survivor, first heard her name after a 2012 radio appearance. He has lived in Ireland since 1977, is active in Holocaust educational work, and has worked regularly with documentary maker Gerry Gregg.

A woman who contacted him in 2012 said she used to live in Hamburg, where a neighbour admitted she was a former guard in the camp where he was once imprisoned.

Gregg’s film, Close To Evil, broadcast by RTÉ last year, showed Reichental contacting people connected to or responsible for the Holocaust. But when the Bergen-Belsen survivor went to visit the former camp guard in Hamburg, he was told she was sick.

It’s not the first time Michnia has been confronted with her Nazi past. In 1945, British occupying forces in northern Germany tried 45 concentration camp guards – including Hilde Lisiewicz.

During the Bergen-Belsen trials, a former prisoner testified that Lisiewicz beat two men with a stick and kicked them with her boots because they had taken two turnips from the camp kitchen. The witness, Dora Almaleh, told the court she remembered the woman guard shouting: “Stop crying or I’ll finish you off.”

Hilde Lisiewicz denied having a stick or kicking prisoners but was found guilty and imprisoned for a year; 11 other camp guards were executed. Seven decades on, Michnia seems to have served in a very different camp to the one Tomi Reichental remembers.

She doesn’t remember seeing piles of dead bodies – she says she worked in another part of the camp – nor can she remember thousands of prisoners wasting away from hunger or disease. Her version of Bergen-Belsen’s history so enraged German historian Hans-Jürgen Brennecke that he filed a criminal complaint against the former camp guard.

“She lies every time she opens her mouth,” said Brennecke, a historian from Lüneburg who recently organised a showing of Close to Evil in his local cinema – its premiere in Germany.

Crucial to his complaint is video testimony Michnia gave to the Bergen-Belsen camp memorial, admitting she led a march in January 1945. Now she has a different recollection.

“I worked in the camp kitchen,” she told The Irish Times.

Brennecke dismisses her claims: “She says she worked in the camp kitchen for 2½ months but she was an SS camp guard for five years.”

He is confident Hilde Michnia’s contradictory testimony is basis enough for his criminal complaint on two counts: accessory to mass murder on a 1945 death march in which an estimated 1,400 women died; and for lying about prisoner deaths at Bergen-Belsen.

Michnia believes she was punished enough with her year in prison, after which she married and had three children.

Widowed for 44 years, she is a devout Catholic and a regular Mass-goer, of late with a roller walker that stands folded in the hallway.

In April, 93-year-old Oskar Gröning, dubbed the “accountant of Auschwitz”, will go on trial accused of being an accessory to 300,000 murders.

If Hamburg state prosecutors, currently examining documentation from Brennecke, decide to proceed with the case, Michnia will be next. She says her daughter, a lawyer, has taken over the case on her behalf.

“I’ve told my story, I suffered enough back in the Hitler times,” she said.

What are her feelings towards Bergen-Belsen survivor Tomi Reichental and the Irish documentary that brought her past back to the present?

In a split second, she says: “They should be ashamed of themselves.”