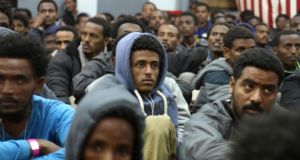 North African migrants sit on a deck of the Italian navy ship ‘San Giorgio’ after being rescued at sea off the coast of Libya earlier this month. Photograph: EPA/Matteo Guidelli

New rules on the treatment of migrants who enter the European Union will come into effect this summer as the European Parliament passed a new law governing the operation of Frontex, the EU’s border control agency.

In the last plenary session of the parliament before next month’s European elections, MEPs voted overwhelmingly for new rules that will ensure migrants who are in need of international protection will be given appropriate help when they cross the EU’s external borders, whether by land, sea or air. They also outlaw so-called “pushback” operations in which border guards turn back boats carrying immigrants.

About 90 per cent of the EU’s illegal immigrants enter it through Greece, with Bulgaria, Spain, Malta and Italy also receiving thousands of migrants each year.

Under the new law border guards may only “warn and order” vessels not to enter in the territorial waters of a member state. The wording of the text was refined to ensure compliance with the principle that individuals must not be returned to any country where there is a risk of persecution, torture or other serious harm.

Portuguese MEP Carlos Coelho, the lead MEP on the legislation, said the new rules will enable Frontex to prevent deaths at sea, “thus reconciling our need to ensure security with our duty to protect human rights”. He pointed out that the new law places a clear duty upon units participating in Frontex operations to engage and to save lives.

Immigration is expected to be a key issue in next month’s European elections, with a number of anti-immigration parties gaining support throughout the EU.