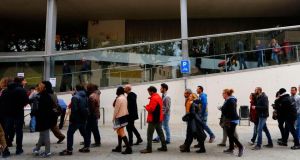 People queue to cast their ballots in a symbolic independence vote in Mataro near Barcelona today. Secessionist-minded politicians helped by cultural organisations and thousands of volunteers organised the informal vote in the autonomous community of Catalonia after Spain’s High Court issued an injunction preventing a formal but non-binding referendum. Photograph: Gustau Nacarino/Reuters 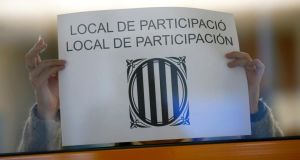 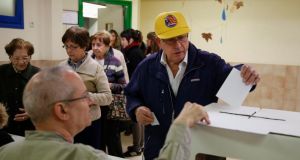 A man bearing a hat with a pro-Catalan independence flag casts his ballot in a symbolic independence vote in Barcelona today. Photograph: Paul Hanna/Reuters

Defying legal and political objections from Madrid, some 2 million Catalans took part in a straw poll on independence today that the region's governing politicians have presented as a prelude to breaking away from the rest of Spain.

Two hours before the polls closed, 1.98 million citizens had voted, according to preliminary estimates of the turnout released by the regional government of Catalonia. Even after being ordered by the Constitutional Court of Spain to suspend the vote, the regional government of Catalonia allowed the straw poll. It has insisted that such a court ban could not override the right of Catalonia's 7.5 million citizens, who include 5.4 million voters, to decide whether to secede from the rest of Spain.

The Catalan secessionist standoff comes after Scotland voted in September not to break away from Britain. That referendum, however, was authorised by the British government. The fight over Catalonia's future is proving far more contentious and has turned into the biggest political challenge for Mariano Rajoy, Spain's prime minister, since he took office in late 2011.

Rajoy and Artur Mas, the Catalan regional leader, have been at loggerheads for two years, initially over fiscal issues. Tensions came to the fore in September when Mr Mas, who is a late but staunch convert to the secessionist cause, signed a decree approving an independence vote on November 9th.

Mr Rajoy fought to prevent a Catalan vote that he claimed would violate the Spanish Constitution. He told a party conference yesterday that the Catalan vote had no validity and would have "no effect whatsoever." Still, Catalans formed lines outside some polling stations early today. After casting his own vote, Mr Mas said that he took full responsibility for any possible breach of Spanish law. He also called on Mr Rajoy to allow Catalonia to hold a formal referendum soon "to be able to decide the future of our country in a legal and agreed manner."

Mr Mas has been under pressure from other secessionist politicians to keep Catalonia's independence plans on track. But he also says that his position has been made untenable by Mr Rajoy's refusal to discuss the status of Catalonia. Mr Mas has been trying to lead Catalonia toward independence without being held responsible for provoking a crisis in Spain. In recent weeks, however, the Constitutional Court has repeatedly sided with Mr Rajoy's government, forcing Mr Mas to adjust his plans in order to circumvent both legal and political objections from Madrid. As a result, the straw poll was organised without any official census of the electorate. In fact, to avoid any institutional involvement, Mr Mas relied on about 40,000 volunteers to take charge of the ballot. The result is thus unlikely to receive the international recognition that Mas had originally hoped for.

Maria Pilar Lahoz, a history professor who voted today in Barcelona, said that her vote had "full validity for me, even if Madrid doesn't believe it." She forecast that Catalonia would gain independence within the coming decade. "It's still going to be a long struggle, but it's unstoppable and the door has now at least been opened," she said.

In late 2012, when Catalonia last held regional elections, secessionist parties secured about 1.8 million votes out of 3.7 million cast. Comparisons are difficult to make, given the informal nature of the straw poll. Catalans aged 16 and over were allowed to take part, while in 2012, only those 18 and older could vote. The straw poll was also open to foreign residents of Catalonia, as well as to Catalans living outside the region.

Corinna Duschat, a German who has been living in Catalonia for five years and also voted in Barcelona, said she was concerned about any attempt to restrict the right of people to vote in a functioning democracy. "I don't see how Madrid thinks this is an issue that can just be ignored," she said. In Hong Kong, Coral Puig, who has lived outside of Catalonia for the last four years, volunteered to help organise a local vote for Catalans. "I want to be legally recognised as a Catalan citizen worldwide," she said by email. "I am not Spanish, and we have been waiting for centuries to get back our identity."