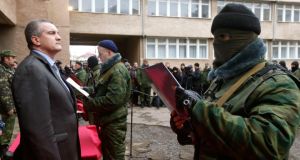 Nato will use spy aircraft to monitor the crisis in Ukraine, which has started training drills to test the combat-readiness of its troops, amid Russian complaints about “lawlessness” in eastern regions where it has threatened to intervene militarily to protect Russian-speakers.

Moscow also said yesterday it would present its own proposals for resolving the crisis in Crimea, which is now controlled by Russian troops and local pro-Kremlin militia groups ahead of a referendum on Sunday to decide whether it will remain in Ukraine or join Russia.

The Kremlin insists it has a right to defend Russians in Crimea and elsewhere in Ukraine from the country’s new pro-western government and alleged ultra-nationalist elements that support it, despite presenting no evidence of a rise in ethnically motivated attacks on Russians in the country.


Russian control
Moscow’s soldiers and their local allies continued to surround the Ukrainian military in Crimea last night and took control of a missile base, a military hospital and also a transport unit, where they fired warning shots as they forced their way in. No one was reported injured.

The crisis in Crimea erupted after Ukraine’s pro-Moscow president Viktor Yanukovich fled street protests against his rule on February 21st, and found refuge in Russia, where he is expected to give a press conference today.

Russia claims that he asked the Kremlin to intervene in Crimea to protect its 60 per cent ethnic-Russian majority.

Nato announced yesterday that it would fly Awacs reconnaissance planes over Poland and Romania to help monitor the crisis in neighbouring Ukraine.

This came after Russia’s foreign ministry said it was alarmed by the “lawlessness that now prevails in eastern regions of Ukraine as a result of the actions of fighters from the so-called ‘Right Sector’, with the full connivance of the new authorities, as they call themselves”. Right Sector is a Ukrainian nationalist group that rose to prominence in the revolution. It denies Moscow’s claim it comprises violent “fascists” bent on attacking Russians.


‘Planned unrest’
Ukrainian officials say sometimes-serious unrest in eastern cities is planned and co-ordinated by Moscow, with the help of busloads of Russian nationalists who are being driven into Ukraine.

At a meeting with his president, Vladimir Putin, Russian foreign minister Sergei Lavrov criticised western efforts to resolve the crisis and said Moscow’s plans would take into account the interests of “all Ukrainians without exception”. He did not say when the proposals would be unveiled.

Meanwhile, officials from the EU, US and UK will meet in London today to identify Russians who will be subject to asset freezes and travel bans that officials hope will persuade Moscow to withdraw.

The White House gave its strongest indication yet that Russia was effectively being thrown out of the G8 group of industrialised nations. Jay Carney, president Barack Obama’s press secretary, said: “It is hard to see the G8 [summit] happening”, in Sochi in June.

He also said the referendum in Crimea “would not be legal under Ukraine’s constitution and would not be accepted by the US and its international allies and partners”. – (Additional reporting: Guardian service)