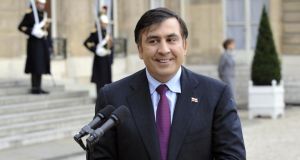 Mikheil Saakashvili: after leading Georgia’s 2003 Rose Revolution, he fought graft and bureaucracy and attracted foreign investors to an economy which, for a few years, was one of the most dynamic in the world – achievements that Ukraine is desperate to match. Photograph: Gerard Cerles/AFP

The people of Odessa, a freewheeling Ukrainian port known for its salty sense of humour, are already having fun with – and at the expense of –their famous new governor.

In contrast, others marked his arrival by hanging neckties on Odessa street signs, as an unwelcome reminder of how he was caught on camera before a BBC interview chewing nervously on his tie during Georgia’s brief 2008 war with Russia.

The mercurial Saakashvili’s past will always shadow him in his new job, as his greatest strength and Achilles heel.

After leading Georgia’s 2003 Rose Revolution, he fought graft and bureaucracy and attracted foreign investors to an economy which, for a few years, was one of the most dynamic in the world – achievements that Ukraine is now desperate to match following its own pro-Western uprising.

By the time he left the presidency in 2013, however, Saakashvili was widely loathed and his party had been ousted from government, amid public disgust over resurgent cronyism, rising state violence and suppression of critics.

He faces a huge challenge in Odessa, which is vital to Ukraine economically and for its location between Russian-controlled Crimea and Transdniestria, a Moscow-backed separatist region of Moldova where Russian troops are based.

Organised crime groups in Odessa will not welcome Saakashvili’s pledge to eliminate smuggling. It is also a city with strong Russian influence, where frequent bomb attacks are blamed on pro-separatist groups and clashes last May ended with 46 people dying in street fights and a fire.

Many would love Saakashvili to fail, including Moscow – which blames him for the 2008 war and for wrecking Russian-Georgian relations – and current Georgian officials, who castigate him for taking Ukrainian citizenship and want to see him tried for abuse of power.

Saakashvili has been the loudest, characteristically, to take up his new citizenship and official post, but he is far from the first foreigner to join Ukraine’s beleaguered pro-Western administration.

The finance minister, Natalie Jaresko, is a Ukrainian-American born in Illinois; economy minister Aivaras Abromavicius is a Lithuanian; and the deputy prosecutor general, David Sakvarelidze, is from Georgia.

“It’s not that Ukraine doesn’t have people to do the job, but we bring fresh eyes and fresh thinking,” said Alexander Kvitashvili, the Ukrainian health minister who held the equivalent post in his homeland under Saakashvili.

“It also helps that we’re not part of the system, and aren’t looking to build a political career, looking at poll ratings or hoping to keep our position for 10 years,” Kvitashvili told The Irish Times.

“If I fail, I’ll be very disappointed, but I won’t cling to my seat.”

“Ukraine doesn’t have that generation, but already things are getting better – if when I started I could barely find one good candidate for a post, now I have 10.”

As it fights several big fires at once – a near-bankrupt economy, a conflict with Russian-backed separatists, the loss of Crimea, a major reform and anti-corruption drive – Ukraine has drafted in experts with experience of reforming post-Soviet systems, who are not beholden to any of the country’s political cliques.

“We’ve had our 15 minutes of fame, and this isn’t about me or how long I stay. We want to be useful and helpful, and get the process right,” said Eka Zguladze, who is leading Ukrainian police reform 10 years after performing a similar task in her native Georgia.

“We are all people with some history of success. We each had individual negotiations about our jobs, so we don’t come as a group. We are tools, and I think it’s very smart to address some reform ‘hotspots’ through us,” Ukraine’s deputy interior minister said.

“Plus, we very consciously took citizenship of this country – I’m a Ukrainian working for the Ukrainian government.”

Dozens of US and European advisers are also helping Ukraine overhaul its byzantine bureaucracy, while US and British military instructors are working to modernise its army, and Polish and Canadian trainers are expected to arrive soon.

To Moscow, this looks like the US and its allies are now running Ukraine.

“Russia finds this hard to understand, because of how its state works and the Kremlin mindset,” said Zguladze.

“But the situation in Ukraine is clear – this is about professionalism over nationalism.”