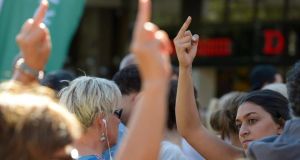 Demonstrators show their middle finger in a silent protest during a general election campaign by the far-right Sweden Democrats. The party, which proposes a 90 per cent cut in immigration, is at 11 per cent in the polls. Photograph: Janerik Henriksson/EPA

This snapshot of prosperous, contented Sweden is disturbed when a dark, heavy-set Roma woman walks on to the Kungsportsbron bridge and lowers herself down on the pavement to begin a day’s begging.

The looks of confusion and annoyance from passersby give an idea of why migration is a key factor in Sunday’s general election.

The SD entered parliament after the last election with almost 6 per cent support, and is now at about 11 per cent in polls. The party proposes a 90 per cent cut to immigration numbers that have seen Sweden accept more asylum seekers per capita than almost all other European countries.

Refugees are entering the country at rates not seen since the breakup of Yugoslavia in the early 1990s. Sweden expects more than 80,000 asylum seekers in 2014, many from wartorn Syria and Iraq, with a 70 per cent jump alone in the first six months of 2014. Add immigrants from Romania and Bulgaria, many Roma, and 2014’s total forecast for new immigrants is almost 200,000, or 2 per cent of the population. Non-ethnic Swedes now comprise about a quarter of the population.

It was a high-risk remark in Sweden, where even querying the cost of immigration is considered a political taboo. The Social Democrats accused Reinfeldt of chasing the SD far-right vote but, on the streets of Gothenburg, many say they understand the prime minister’s remarks.

“It had to be said because otherwise it left the debate open to the extremist parties who claim migration costs eat up almost all of the budget,” says local man Anders Wettergren (71).

“People are worried about funding for schools and hospital. But we have to make clear that we live well in Sweden; that gives us a responsibilty to help others, and the cost of helping should be discussed.”

So has Reinfeldt forced an overdue debate on immigration, or let the genie out of the bottle to close the gap on rivals and secure re-election?

It is premature to put Sweden in the same category as neighbouring Norway and Denmark, says Kokkonen, where far-right parties are political powerbrokers and, in Norway’s case, even in government.

Last night in Gothenburg, local paper GT held a public party to celebrate its 18-month series of interviews with people from 150 of the 189 nations living in the city.

“These people have brought such a richness to Gothenburg that it’s important to remind people that immigration is not all about the cost,” says GT cultural editor Ingrid Norrman, who co-ordinated the project.

Sweden’s conflicted feelings on migration have parallels with Ireland, both now countries of immigration with memories of mass emigration.

In Gothenburg’s port-side custom house, a small museum details how more than one million Swedes left from there between 1850 and 1930. Their letters, suitcases and even baby clothes on display are poignant reminders of a country unable to give its people a perspective.

Author Vilhelm Moberg’s four-book series about their struggles in the US makes for timely reading ahead of the weekend election. Sunday’s result will signal whether the seeds of doubt on immigration sown by Sweden’s far right have begun to sprout in voters’ minds.

“[The] germs of unrest are like seeds scattered by the wind,” wrote Moberg in The Emigrants.

“One takes root somewhere deep in a man’s soul and begins its growth unknown.”