Serbia sends troops to halt people-smuggling from Bulgaria and Macedonia 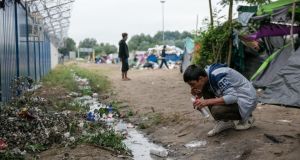 An informal camp in Serbia beside the border fence close to the E75 Horgas border crossing with Hungary. Photograph: Matt Cardy/Getty Images

Hundreds of asylum seekers have brawled at a migrant reception centre in southern Hungary, amid rising tension along the so-called Balkan route as countries tighten border security again to tackle a rise in people-smuggling.

Eight people needed hospital treatment after about 200 migrants fought at the reception facility in the Hungarian town of Kiskunhalas, about 30km from border with Serbia.

Some 200 police were deployed to halt the clashes, the cause of which was not clear, said senior Hungarian security official Gyorgy Bakondi.

The unrest came as human rights groups accuse Hungary of mistreating migrants, and flouting its legal obligations to people fleeing war and persecution by making it almost impossible for them to receive refugee status in the country.

Hungary built fences on its frontiers with Serbia and Croatia last autumn to divert migrants and refugees travelling north through the Balkans, but several thousand each month have continued to breach the barrier and enter legally via “transit zones”; most quickly travel on through the country to Austria, Germany and beyond.

Since July 5th, any illegal migrant detained by Hungary’s police within 8km of the border can be returned to Serbia without any legal process.

Serbia fears a build-up of thousands of asylum seekers on its territory, as Hungary sends people back and hundreds of migrants each day enter from Bulgaria and Macedonia with the help of smugglers.

Serbia has now announced the deployment of joint army and police teams to patrol its borders with its southern neighbours, to halt the flow of migrants and crack down on traffickers.

“Serbia cannot be a parking ground for people from Afghanistan or Pakistan whom no one else in Europe wishes to accept . . . Serbia protect its national interests,” said the country’s prime minister, Aleksandar Vucic. As of last Saturday, there were 2,669 migrants in Serbia, of which 85 per cent were from Afghanistan and Pakistan, he said, adding that Serbia could accommodate 6,000 to 7,000 asylum seekers in state-run facilities.

Mr Vucic warned that migrants who entered Serbia without documents and sought to move on without applying for asylum would be expelled within 30 days.

Numbers are now dropping as a result of a controversial deal between the EU and Turkey, but more than 100,000 migrants have been registered on arrival in Serbia this year.

Hungary’s government opposes German-led efforts to distribute refugees around the EU, calling it unworkable and dangerous, and will hold a referendum on the issue in October.