A group of around 300 exhausted migrants abandon their attempt to walk to Budapest and return to a reception camp in Roszke. Video: Reuters 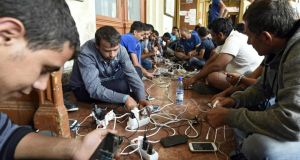 In the fields and orchards on the border between Serbia and Hungary, groups of refugees and migrants huddle in the shade and wait for a chance to dash over the frontier into the European Union, where they hope a safe and prosperous future awaits.

Ramiz (20) from Afghanistan is not the oldest member of his group, but his smartphone and online social network make him a typical leader in this great, modern migration, in which technology and the ability to use it play key roles.

“The last group didn’t make it,” he mutters, studying and swiping the screen of his phone.

They had left only a few minutes earlier for the ditch, lined with razor wire on the Hungarian side – which marks the border – and had not returned. So how did he know they had failed to make it across?

A member of that group, even while being confronted by Hungarian border police, had fired off a quick message to give Ramiz the news. And when Ramiz checked another possible crossing a little later, only to find police facing him over the ditch telling him not to come across, he snapped a quick photograph and forwarded it to a large group of fellow migrants.

They would receive the picture, which would contain the time and GPS co-ordinates for the exact spot where he took it, and know to avoid that route.

“This is how we travel,” he smiled. “How do you think we got here?”

Through Turkey, Greece, Macedonia, Serbia and Hungary, hundreds of thousands of migrants making for western Europe now rely on smartphones and social media to avoid police, find “safe” people smugglers and accommodation, and follow the latest news as governments grope for answers to a deepening crisis.

“They make contact and share information on Facebook and other social media. In each country they get contact numbers for people who – for a price – can help them continue their journey,” said Zsuzsanna Zsohar, a volunteer working with refugees and migrants in Hungary.

“They know everything before they get here,” she said at Budapest’s Nyugati train station, where many gather to get help from volunteers and arrange onward travel – by train, bus or with people smugglers.

“From social media they know where to connect to free wifi, where to sleep and eat and change or receive money. They know better than the locals.”

Despite the dangers of using people smugglers, many migrants seek out their services in a bid to reach Germany, or another country where they want to settle, without being caught, registered and fingerprinted by police in the Balkans or Hungary.

Under the EU’s so-called Dublin regulation, asylum seekers should be sent back to the first member state that they reach – a rule that critics say drives migrants into the hands of smugglers and which Hungary and Italy say places an unbearable burden on them. The asylum system is so bad in Greece that it is currently exempt from this rule.

Not all migrants have smartphones and virtual, online lives, however: Syrians tend to have the most money and best kit on the Balkan route, while Afghans, Pakistanis, Bangladeshis, Eritreans and Somalis are among the poorest, and their journeys are usually the slowest and toughest, with little help from internet resources.

Migrants quickly hooked up extension cords to the electricity feeds of the high-tech trucks, and scores were soon crouched and seated around the vehicles, charging their phones for free, checking social media and following the squabbles of the EU and Hungary over what best to do with them.

In mid-afternoon, hundreds packed up at the Budapest station and set off down Hungary’s main motorway towards Austria, leaving police powerless; at about the same time, migrants at Bicske left the train after 24 hours and, in defiance of police, walked westwards down the railway line. In Roszke too, migrants clashed with police and some briefly fled, before being caught and brought back.

People at the Budapest station and Bicske said they were in contact with each other, and the mass “break-out” appeared to be co-ordinated; at the very least, the actions of one group were surely influenced and emboldened by those of another – a result of their constant, high-speed, online interconnectedness.

Previous generations of police held a huge advantage over crowds they sought to control in the speed at which they could communicate and co-ordinate action; that advantage has been all but lost to these smartphone-wielding migrants with fast internet, large networks of contacts, and free, or very cheap, wifi.

Every evening now, as dusk falls across the Balkans, thousands of people, thousands of miles from home, are being guided to what they hope will be a bright future, by the glow of Google Maps on the phone-cum-computer in their hands.