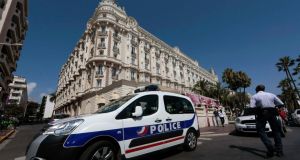 A police car is seen parked outside the Carlton hotel in Cannes yesterday. REUTERS/Eric Gaillard

A lone gunman made off with jewellery and watches worth an estimated €40 million from a luxury hotel in Cannes yesterday, in what was reported to be France’s second biggest jewel heist. The man, wearing a mask and gloves and carrying a briefcase, strolled into a diamond exhibition at the Carlton hotel just before midday, threatened staff and visitors and filled the case with jewels and diamond-encrusted watches before walking out.

“It was all over very quickly. There was no violence,” a French police officer said. The thief entered the hotel alone, but police said they believed he had an accomplice waiting outside.

It is the third significant jewel theft from hotels in the Cannes area in just over two months. During the Cannes film festival in May, thieves stole more than €750,000 worth of jewellery belonging to the exclusive Swiss jeweller and watchmaker Chopard.

The gems stolen in May were to have been loaned to A-list film stars and celebrities attending the festival, and were in a safe in a room at the Suite Novotel. The thieves removed the whole safe in the middle of the night without forcing the room’s door or using a keycard, according to police.

A week later a necklace reportedly worth €1.9 million by the Swiss jeweller De Grisogono vanished after a celebrity party at the five-star Hotel du Cap-Eden-Roc in the resort town of Cap d’Antibes. Police are investigating whether the raids were the work of the same gang.

Rick pickings
“Thieves see Cannes as rich pickings,” said a police officer with the crime squad in Nice, which is investigating yesterday’s raid. “A full and urgent operation is under way to catch the culprit and recover these jewels.”

Another police officer told the Nice Matin newspaper: “The raid took place in broad daylight at a time when hundreds of tourists were enjoying the sunshine. It could not have been more daring. The thief took advantage of the crowds and the fact it was Sunday and the atmosphere was relaxed.”

Police refused to say whether they were linking the raid with the escape of a member of the notorious Pink Panther gang from a Swiss jail on Thursday.

Milan Poparic fled with another inmate from Orbe prison, in the western Swiss state of Vaud, after his accomplices rammed a prison gate and overpowered guards with bursts from their AK-47 automatic rifles. Police said he was the third member of the Pink Panthers to have escaped in as many months.

Interpol believes the group has been targeting luxury watch, gem and jewellery stores in Europe, the Middle East, Asia and the United States since 1999 and has netted more than €330 million.

The stolen diamonds had been on show since July 20th and were supposed to remain at the Carlton until the end of August in a temporary exhibition called Extraordinary Diamonds, organised by the prestigious Leviev diamond house owned by Russian-born Israeli billionaire Lev Leviev.

Leviev (57), who is described as a diamond dealer, businessman and philanthropist, owns diamond mines in Russia and Africa and is a major competitor to the African diamond giant De Beers. – (Guardian service)