Leaders at Minsk talks to pledge support for Ukraine sovereignty 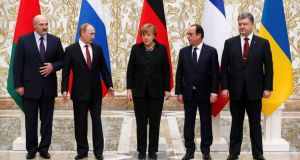 The four leaders meeting for peace talks in Belarus on the Ukraine crisis are planning to sign a joint declaration supporting Ukraine’s territorial integrity and sovereignty, a Ukrainian delegation source has said.

The source said a separate document would be prepared by the three-way ‘contact group’ comprising Russia, Ukraine and the Organisation for Security and Cooperation in Europe affirming commitment to a ceasefire plan drawn up in Minsk, Belarus, last September and also signed by separatist leaders.

Tough talks on Ukraine’s crisis continued in the Belarusian capital Minsk on Wednesday, ahead of the crucial summit of the Ukrainian, Russian, German and French leaders aimed at halting the bloody conflict.

Envoys representing Kiev, Moscow, Russian-backed separatists in eastern Ukraine and the Organisation for Security and Co-operation in Europe resumed negotiations on Wednesday morning after failing to agree a ceasefire deal last night.

“There are a number of problems which remain to be resolved ... but it is very likely to go ahead,” French foreign minister Laurent Fabius said on Wednesday.

“It is really a last-chance negotiation,” he warned of the scheduled top-level talks, which he said would “very probably” go ahead.

Analysts say key sticking points are the future status of separatist-held areas, the size of the proposed buffer zone between rebel and government forces, funding for areas now under insurgent control and the means of securing the Ukraine-Russia border and of monitoring any ceasefire.

“Ukraine accepts decentralisation for those regions, but the separatists and the Russians would like to go much further,” Mr Fabius said, adding that Moscow was making “all sorts of demands” about control of the frontiers.

Ukrainian president Petro Poroshenko is trapped between huge western pressure to make concessions to Russia and the militants, and domestic demands not to submit to Moscow and its alleged proxies in Donetsk and Luhansk regions.

“We demand an unconditional peace,” Mr Poroshenko said on Wednesday.

“We demand a ceasefire, a withdrawal of all foreign troops, and closing of the border…We will find a compromise within the country.”

At least 15 people were killed and 68 injured in an alleged rebel rocket strike on the government-held town of Kramatorsk on Tuesday, and at least one person died when a missile hit Donetsk bus station on Wednesday, in an attack that the rebels blamed on government forces.

In what appeared to be a push by both sides to make strategic military gains ahead of the Minsk talks, the militants sought to encircle the key government-held rail hub of Debaltseve and Kiev’s troops claimed to have reclaimed territory around the port of Mariupol.

Military spokesman Valdyslav Seleznyov said 19 Ukrainian troops were killed and 78 wounded over the last 24 hours of a conflict that has claimed the lives of at least 5,350 people and displaced more than one million people.

Wednesday’s talks are seen as a vital chance to prevent a further escalation in a conflict that has brought the West’s relations with Russia to a post-cold war low.

Washington has warned that it may supply defensive weapons to Ukraine if the negotiations fail, and the EU could tighten sanctions on Russia, while Moscow says such “threats” only inflame an already bitter and volatile situation.

A previous ceasefire deal agreed in Minsk last September reduced but failed to halt fighting in eastern Ukraine however, and hostilities eventually regained their previous intensity.

Diplomats said a long day – and possibly night – of difficult talks lay ahead.

Before their planned departures for Minsk, German chancellor Angela Merkel and French president Francois Hollande spoke by telephone for a “quick update on the situation” and pledged to “try everything, right to the end” to make a breakthrough, the French presidency said.