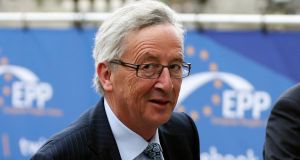 As governments from London to Paris conti- nue to reflect on the success of anti-establishment parties in the European elections, attention has turned to another contest: the battle for the next head of the European Commission. What threatened to be a tedious exercise in EU bureaucracy has ignited a diplomatic tussle.

Prior to last Tuesday’s post-election summit in Brussels, Cameron phoned several heads of state, including Taoiseach Enda Kenny, to garner support for his position. Cameron’s opposition to the so-called Spitzenkandidat process appeared to have been bolstered late last Tuesday night when German chancellor Angela Merkel spoke of a “broad tableau” of candidates.

But by last Friday the chancellor had changed her tune. “I am holding all talks in the spirit that Jean-Claude Juncker should become president of the European Commission,” she said.

The sentiment was echoed in Der Spiegel, which interpreted the controversy as a wider reflection on Britain’s relationship with the EU. “For years Britain has blackmailed and made a fool out of the EU. The United Kingdom must finally make a choice: It can play by the rules or it can leave the European Union. ”

The British press entered the fray, with the Sun running a story yesterday on Juncker under the headline: “Six reasons why this is the most dangerous man in Europe. ”

The issue threatens to escalate into a serious rift between London and Berlin.

Cameron’s close relationship with Merkel had been seen as a crucial advantage in his bid to renegotiate Britain’s relationship with the EU – the most significant challenge facing the EU in the coming years. The prospect that the Eurosceptic Alternative für Deutschland party will join the Tory-led European Conservatives and Reformists (ECR) group in the European Parliament may also strain relations.

Cameron may have himself to blame: the decision by the Conservative Party to leave the EPP in 2009 meant it was powerless to shape the nomination process in its early stages.

But he has got tacit support for his position from many EU leaders and citizens, who failed to grasp the link between their vote and the next head of the European Commission.

The ambiguity of the wording is itself a damning indictment of the impenetrability of some EU legislation, which

opts for legal uncertainty in the spirit of compromise.

The impasse also suggests that leaders, including Merkel, half-heartedly committed to a process they never really fully endorsed, and should have clarified the legal basis of the Spitzenkandidat system earlier. The 28 EU member states now face the prospect of inheriting a commission president that MEPs rather than member states have chosen, all in the name of a dubious interpretation of “democracy”.

Reports that Merkel has requested French president François Hollande to nominate IMF managing director Christine Lagarde for the job suggest that the process is far from a done deal. But how Mer- kel or Cameron can back down with grace remains to be seen.

Enda Kenny could still be in the running for head of the European Council. Finnish prime minister Jyrki Katainen, who is hoping for a top EU job, is likely to succeed Olli Rehn as Finland’s commissioner, for the interim at least, following Rehn’s election as an MEP.

The fact that the leadership of the European Commission has become the battleground for a wider debate about the legitimacy and public accountability of the EU is testimony to the importance of the role. Who leaders choose to steer the EU over the next five years is of crucial importance as the union seeks to renew itself and connect with the public.