Italy earthquake: ‘I heard doors and cupboards being opened’

‘Turns out it wasn’t a burglar . . . but a much more disturbing visitor, a 6.6 earthquake’

A powerful earthquake with a preliminary magnitude of 6.6 has rocked central and southern Italy. 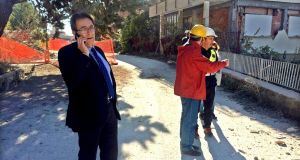 The mayor of the town of L’Aquila, Massimo Cialente, speaks on his mobile phone as he checks the damage after the strong earthquake hit central Italy. Photograph: Alberto Orsini/EPA 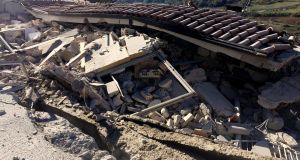 A building damaged in L’Aquila by the 6.6 magnitude earthquake, which struck 6km north of Norcia. Photograph: Alberto Orsini/EPA Debris was strewn around after a wall collapsed following the earthquake, which devastated parts of Macerata, Le Marche and Umbria. Photograph: EPA/Italian army 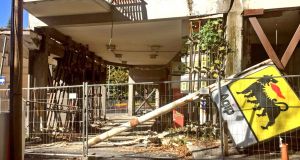 Another building that was damaged in L’Aquila. Photograph: Alberto Orsini/EPA

On the morning the clocks went back, your correspondent was asleep, enjoying the extra hour, when we were rudely awakened at 7.41am.

There was the noise of what sounded like doors and cupboards being opened on the ground floor of the house.

In my paranoia, I immediately thought we had a burglar in the house. Of course, it was no burglar but rather a much more disturbing visitor, namely an earthquake that measured 6.6 on the Richter scale, which at that moment was yet again devastating parts of Macerata, Le Marche and Umbria, the area effected by the earthquakes of last week and last August.

We were not the only ones to feel this particular shake. From Bolzano in Northern Italy to Bari on the Italian heel and from Salzburg in Austria to the Italian capital, Rome, this most recent shake was registered by many, who then rang police and town hall offices for information.

It is not exaggerating to suggest that a certain “quake mania” is beginning to insidiously work its way into the national pysche. As soon as there is a serious quake, people are on the phone to friends and relatives who live anywhere near the earthquake epicentres.

For example, Simona, a good friend here in the village (Trevignano Romano), this morning was immediately on to friends in Macerata. They told her that they, along with their children, were standing out in the street in their dressing gowns, having abandoned their house (which is still standing) just as soon as the earth began to shake.

Lucia, another village friend here in Trevignano, did the same thing, running out into the garden. This is an understandable reaction if not necessarily the correct procedure. On TV, earthquake experts regularly advise that if you find yourself in a building during a bad shake, the best option is not to move because you risk death or serious injury from falling masonry. Rather you should go and stand under a doorway lintel in one of the house’s supporting walls . . . and then pray.

Half-jokingly, but only half, Simona said to my wife, Dympna, this morning that since we have a large garden, we should buy a caravan and park it in the garden so that we can house ourselves and friends in case next time the quake gets even closer. At the moment, the quakes are about 100-kilometres away but seismic maps offer little comfort because they suggest that in our Zona 3, earthquakes are few and far between but always very strong, whilst vulcanologists tell us that we are now living in a moment of “seismic contagion”. Nice to know.

Our Mayor was out in the square this morning, accompanied by a team of civil protection operatives, to check out any building damage (none, it seems, so far). Since last Wednesday, all village schools have been closed as a precaution.

Some rather more important civic authorities, too, have closed up shop. The Presidential Palace, Il Quirinale, in Rome, normally open to visitors for a Sunday morning concert, has been closed until further notice. More worryingly, technicians are currently checking out the Coliseum , whilst the city’s metro service has also been closed.

This might all sound like an over-reaction but there is the worrying consideration that most of ancient Rome is to be found within the two kilometre wide basin of the Tiber river, that is built on soft ground. As well as that, given Rome’s huge expansion since the second World War, environmentalists estimate that 35 per cent of Rome’s houses do not even qualify for a “habitation certificate”, never mind being built along anti-seismic lines.

Precautionary measures in Rome are, of course, a far cry from the further devastation that this morning’s most recent 6.5 shake has inflicted on towns such as Norcia, Castelsantangelo sul Nera, Precci, Visso and Ussita, all hit last Tuesday night. As with the midweek quake , there have, so far, been no fatalities, even if some of these old towns have been completely flattened, prompting the Mayor of Castelsantangelo sul Nera, Mauro Falcucci, to say: “I just hope that some of those stubborn people we told to get out, didn’t stay on instead . . .”