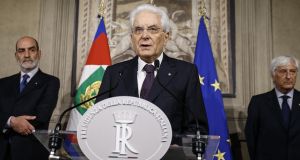 Italy’s efforts to form a government broke down on Sunday after the president rejected a eurosceptic pick for the key economy ministry, triggering a potential constitutional crisis and opening the prospect of fresh elections.

The leaders of the two anti-establishment parties trying to field a government, the far-right League and the 5-Star Movement, accused President Sergio Mattarella of betraying the constitution, and demanded a new vote as soon as possible.

Prime minister-designate Giuseppe Conte gave up on efforts to form a government after the head of state refused to endorse 81-year-old economist Paolo Savona, a vocal critic of the euro and the European Union, to the pivotal economy post.

“I have agreed and accepted all the nominations, except that of the minister of economy,” Mr Mattarella said in a sombre, televised speech.

“I asked for that ministry an authoritative political figure from the coalition parties who was not seen as the supporter of a line that could provoke Italy’s exit from the euro,” he added.

League leader Matteo Salvini and 5-Star chief Luigi Di Maio responded angrily, saying the president was acting beyond the powers the constitution assigns to him.

“In a democracy, if we are still in democracy, there’s only one thing to do, let the Italians have their say,” Mr Salvini said in a fiery speech to supporters in central Italy.

“I was informed of the request by the political parties to hold an early election. I will evaluate that request in the coming hours, and I will take an initiative,” Mr Mattarella said.

After speaking, Mr Mattarella summoned former International Monetary Fund senior official Carlo Cottarelli for a Monday morning meeting – an indication he may be considering asking him to head a government of unelected technocrats.

He would be a calming choice for the financial markets, who were spooked by Mr Savona’s criticism of the euro and German economic policy.

However, an administration led by Mr Cottarelli would likely only be a short-term solution because the majority of parliamentarians have said they would not support a technocrat government.

If he failed to win parliamentary backing, he would stay in office in a caretaker capacity ahead of elections that would most likely be held in September or October.

On Sunday, Mr Savona had tried to allay concerns about his views in his first public statement on the matter. “I want a different Europe, stronger, but more equal,” he said in a statement.

He said his position on debt was the same as that forged by the potential coalition allies in their programme – which says it will be reduced not through austerity or tax cuts, but through targeted investments and policies that boost economic growth.

Financial markets had already reacted to the coalition’s programme with alarm because of concern that they would not reign in the massive national debt, worth 1.3 times its annual output.

Mr Savona has had high-level experience at the Bank of Italy, in government as industry minister in 1993-94, and with employers’ lobby Confindustria. But his critical stance on the euro has been the focus of concern.

In Sunday’s statement, he did not mention his opinions on the euro, but more than 70 slides outlining a “plan B” for Italy’s exit from the euro, co-authored by Mr Savona in 2015 with a dozen others, circulated on social media. – Reuters