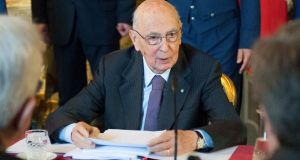 The only person to serve a second term as Italian president, Giorgio Napolitano has been in the Quirinale Palace, the official presidential residence, for nine years. Photograph: Reuters

Italy may be headed for another period of political turbulence following the expected resignation today of President Giorgio Napolitano (89).

Just before Christmas, Mr Napolitano had confirmed media speculation that he would step down as soon as Italy’s term of EU presidency ended.

With the country’s prime minister, Matteo Renzi, marking the end of the Italian presidency in the Strasbourg parliament yesterday, the way is clear for Mr Napolitano to resign, probably before midday.

The only person to serve a second term of office as Italian president, Mr Napolitano has been in the Quirinale Palace, the official presidential residence, for nine years.

When he accepted an unprecedented second term of office in April 2013, he did so only to resolve a constitutional crisis which had seen parliament twice fail to elect a successor.

During his nine years in office, Mr Napolitano has expanded the presidential mandate. In 2011, he played a fundamental role in a putsch which saw Silvio Berlusconi removed from office during a severe economic crisis and being replaced by his choice, former EU commissioner Mario Monti.

The first three votes in the secret ballot require a two- thirds majority to elect a new president, while from the fourth vote on a simply majority will suffice.

The new president could be in office early next month. However, there is no current agreement on the profile or name of any obvious candidate. With the secret ballot, the possibility of a surprise – such as that which saw 101 centre-left deputies voting against former European Commission president Romano Prodi in April 2013 – remains high.