Irish Government has option of opting out of mandatory resettlement programme 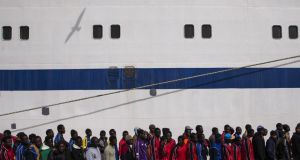 Under EU law, Ireland and Britain have an automatic opt-out on most EU justice and home affairs legislation, which covers migration and asylum issues, but in practice it opts in to many of these measures. Photograph: Dan Kitwood/Getty Images.

Ireland is to take 272 migrants per 20,000 under a mandatory resettlement programme for migrants proposed by the European Commission today.

However, the Government will have a choice as to whether it will participate in a separate relocation scheme which seeks to redistribute migrants who have already arrived in the European Union across the bloc.

Under EU law, Ireland and Britain have an automatic opt-out on most EU justice and home affairs legislation, which covers migration and asylum issues, but in practice it opts in to many of these measures.

While Britain has already said that it will not participate in the relocation system proposed by the Commission, Ireland has not yet confirmed whether it will take part.

Speaking in Brussels, European Commission First Vice-President Frans Timmermans said it was important that the EU helped those countries at the front-line of the migrant crisis, adding that it was up to the UK and Ireland to decide whether to participate in the relocation scheme.

“The treaty is the treaty. It is up to those countries to decide whether to be part of the system of solidarity or not - yes, or no. What they want to do politically is up to them and I hope we would see a great how of solidarity across the European Union.”

Today’s announcement by the European Commission represents the most ambitious EU proposal on migration to date and marks an effort by the EU to take a collective response to the continuing crisis in the Mediterranean where thousands of migrants are attempting to cross into Europe.

Though EU member states will now have to approve the proposal, it is the first time the EU has proposed introducing migrant quotas for member states.

Under the relocation scheme proposed by the Commission, up to 20,000 asylum seekers residing outside the European Union will be resettled within Europe by 2020, based on a distribution key.

According to European Commission figures, Ireland resettled 280 refugees from outside Europe in 2014, a relatively high figure compared to other countries.

Separately, foreign ministers meeting next Monday will consider a proposal to launch an EU CSDP (common security and defence policy) mission in Libya, which may allow the EU to target boats used to traffic people across the Mediterranean. It is currently seeking a UN-security-council mandate to launch the mission.

While Ireland is sending a naval vessel to participate in search and rescue organisations in the Mediterranean, legally it is prohibited in participating in non-humanitarian related interventions.

Responding to reports today that the European Commission is considering on-shore operations in Libya, EU High Representative Federica Mogherini said the Commission is not considering allowing “boots on the ground” in Libya.

“We are not planning in any way a military intervention in Libya. It’s not in any way an option for us. What we are planning is a naval operation... to dismantle the business model of the criminal operations which are trafficking and smuggling people,” the EU’s foreign policy chief said today in Brussels.

“Countries who should take back people, should. Return is an integral part of our plan. It’s a cornerstone of the plan so in that sense I think Theresa May can rest assured,” he said, referring to the British Home Secretary who has criticised the EU’s plans. However, he said that Europe had to react to the migrant crisis.

“We can’t accept a situation where whole families are just drowning in the Mediterranean. We have to try and save those people,” he said.