A train carrying the remains of many of the victims of a Malaysia Airlines plane downed over eastern Ukraine arrived in Ukrainian government territory on Tuesday. The bodies will then be taken back to the Netherlands to be identified. Video: Reuters

A senior separatist leader, Aleksander Borodai, handed over two black boxes from an airliner downed over eastern Ukraine to Malaysian experts in the city of Donetsk in the early hours of Tuesday. Video: Reuters 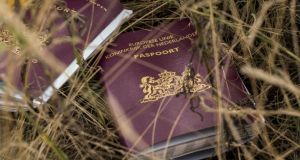 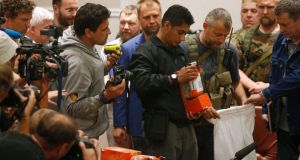 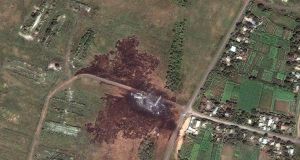 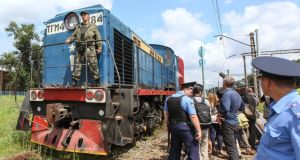 A Ukrainian policeman watches as a train carrying the remains of the victims of Malaysia Airlines MH17 downed over rebel-held territory in eastern Ukraine arrives in the city of Kharkiv in eastern Ukraine . Photograph: Gleb Garanich/Reuters 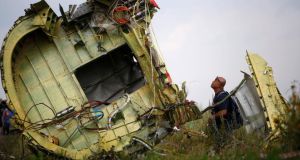 International police agency Interpol said today one of its teams had started identifying victims of the Malaysia Airlines MH 17 flight that crashed over Ukraine last week.

“The remains of victims recovered so far were labelled and numbered before being transported in refrigerated freight wagons from Donetsk to the designated centre of operations in Kharkiv where the Interpol Incident Response Team, along with other international disaster victim identification teams in place, will carry out preliminary examinations,” the Lyon, France-based agency said in a statement.

It said that once the preliminary examinations are completed the victims will be transported to the Netherlands where fuller identification will be carried out.

The train carrying the remains of many of the 298 victims of Malaysia Airlines flight arrived at a Ukrainian government base today on the first leg of their final journey home to be reclaimed by their families.

Five refrigerated wagons containing 200 body bags arrived in the city of Kharkiv after pro-Russian separatists agreed to hand over the plane’s black boxes to Malaysian authorities and the bodies to the Netherlands, where many victims had lived.

The train slowly rolled into the grounds of an arms industry plant, where the remains are due to be unloaded and flown to the Netherlands.

A spokeswoman for a Dutch team of forensic experts in Kharkiv said this was not expected before Wednesday.

A representative of the OSCE European security watchdog said there were still human remains left where the Boeing 777 hit the ground in eastern Ukraine last Thursday.

“We did not observe any recovery activity in place,” spokesman Michael Bociurkiw said after his group inspected the site earlier in the day.

The jet was flying from Amsterdam to Kuala Lumpur when it was shot down near Donetsk, a stronghold of pro-Russian rebels, where fighting with Ukrainian troops flared again today.

Western governments have threatened Russia with broader sanctions for what they say is its backing of the militia.

However, they are struggling to agree a response, and European Union ministers meeting in Brussels today delayed action for a few days.

Russian President Vladimir Putin said he would urge the separatists to allow a full investigation which the Netherlands said it would lead.

Malaysia said it would send the black boxes to a British lab for analysis.

“Here they are, the black boxes,” separatist leader Aleksander Borodai told journalists at the headquarters of his self-proclaimed Donetsk People’s Republic as an armed rebel placed the boxes on a desk.

As they went about their work, loud explosions were heard on the outskirts of Donetsk, some 60 km from the site One shell was sticking out from a hole outside a residential block with a pool of blood next to it.

“A woman was killed here, her son was sitting next to her crying,” said Tamara Lelyk, a 73-year-old cleaning lady.

The shooting down of the airliner has sharply deepened the Ukrainian crisis, in which separatist gunmen in the Russian-speaking east have been fighting government forces since pro-Western protesters in Kiev forced out a pro-Moscow president and Russia annexed Crimea in March.

Mr Putin said a Ukrainian military “tank attack” on Donetsk was “unacceptable” and urged the West to put pressure on Kiev to end hostilities.

Andriy Lysenko, a spokesman for Ukraine’s Security Council, said 13 Ukrainian troops were killed in fighting in the east in the last day when “terrorists” attacked the army and their roadblocks 20 times.

The rival sides were now fighting around the city of Lysychansk, some 130 kilometres north-east of Donetsk, he said. Kiev also said it recaptured the adjacent town of Severodonetsk and the rebels confirmed they were forced out.

Shaken by the deaths of nearly 300 people on the Malaysian airliner, Western governments have threatened Russia with stiffer penalties.

European Union foreign ministers were meeting on Tuesday to discuss further penalties against Russia, but the most they are expected to do is to speed up implementation of sanctions against individuals, and possibly companies, agreed in principle last week before the plane was brought down.

France said it would deliver a second helicopter carrier to Russia despite opposition from Britain and France, highlighting the difficulties in reaching an agreement on a response from Western powers.

Diplomats say more serious sanctions against whole sectors of the Russian economy will depend largely on the line taken by the Dutch, because of the high number of Dutch victims.

At the United Nations, the Security Council unanimously adopted a resolution on Monday demanding those responsible “be held to account and that all states cooperate fully with efforts to establish accountability”.

Putin noted an increased use of language of “ultimatums and sanctions” towards Russia and called for more dialogue with the West.

US president Barack Obama said it was time for Putin and Russia “to pivot away from the strategy that they’ve been taking and get serious about trying to resolve hostilities within Ukraine.”

He said Russia had a direct responsibility to compel separatists to cooperate with the investigation.

European security monitors said gunmen stopped them inspecting the site on Friday and Ukrainian officials have said separatists tampered with evidence at the crash site.

But the spokesman for the European security monitors said they had unfettered access on Monday, and a Dutch victims identification team was allowed to inspect the storage of the bodies in refrigerated rail cars before they left for Kharkiv.

The Malaysian crash experts walked through the wheat fields by the wreckage, making notes and taking photographs on Tuesday.

Russia’s Defence Ministry has challenged Western accusations that pro-Russian separatists were responsible for shooting down the airliner and said Ukrainian warplanes had flown close to it.

The ministry also rejected accusations that Russia had supplied the rebels with SA-11 Buk anti-aircraft missile systems - the weapon said by Kiev and the West to have downed the airliner - “or any other weapons”.