Hungary under fire over migration as college halts courses for refugees 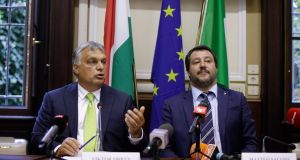 Hungary is again coming under fire over its hardline anti-immigration policy, after its premier Viktor Orban forged an alliance with Italy’s far-right interior minister Matteo Salvini and a top Budapest university halted courses for refugees and asylum seekers.

Peter Szijjarto, Hungary’s foreign minister, summoned the Swedish ambassador to Budapest on Thursday to complain about criticism from Swedish officials.

He cited comments from Stockholm’s minister for migration, Helene Fritzon, and a tweet posted by Swedish foreign minister Margot Wallstrom.

“I just read today that Viktor Orban in Hungary and Matteo Salvini in Italy want to form an alliance against ‘the democrats and the left’ in Europe, naming [French president Emmanuel] Macron as their main opponent,” she wrote on Wednesday.

“I have one thing to say to them: bring it on.”

Mr Szijjarto said it was “a lie” that Mr Orban and Mr Salvini wanted to fight “against democracy”.

At their meeting on Tuesday, Mr Orban and Mr Salvini agreed to work together on stopping migration, which they said would be the main issue in elections for the European Parliament next spring.

Mr Orban described Mr Salvini as a “hero” and an inspiration, saying: “Hungary has shown that we can stop migrants on land. Salvini has shown migrants can be stopped at sea. We thank him for protecting Europe’s borders.”

He also took aim at Mr Macron, calling him “the head of the political forces supporting immigration. On the other hand, we want to stop illegal immigration.”

Mr Macron responded by vowing to “give no ground to nationalists and those who spread words of hate. If they want to see me as their main opponent, they’re right.”

The EU is taking Hungary to court over its asylum policy, its crackdown on NGOs and education reform that targets Budapest’s Central European University (CEU), which is funded by Mr Orban’s nemesis, billionaire liberal George Soros.

CEU this week suspended courses for refugees and asylum seekers that may be hit by a new tax on all activity that helps migrants or “promotes” migration.

“Once again, the government has been able to rely on broad and vaguely-worded legislation to curtail legitimate activities that run contrary to its xenophobic anti-migration policies, without having to actively enforce the law,” said Human Rights Watch.