Hungary to close border with Croatia to stop flow of migrants 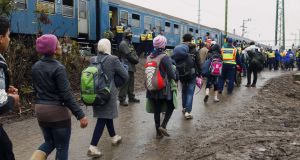 Migrants board a train after making their way through the countryside and crossing the Hungarian-Croatian border near the village of Zakany in Hungary to continue their trip to north. Hungary said it will shut its border with Croatia at midnight. Photograph: Hanna Sonia/AFP/Getty

Hungary has said it will close its southern border with Croatia from midnight, pressing ahead with a unilateral crackdown on the flow of migrants.

The move comes a month after Hungary’s right-wing government shut its frontier with Serbia to hundreds of thousands of migrants – many of them refugees from war in Syria – streaming across the Balkan peninsula from conflict and poverty in the Middle East, Africa and Asia.

Hungary has erected a steel fence almost the length of its southern frontier, declaring it has to secure the borders of the European Union from mainly Muslim migrants who it says pose a threat to the prosperity, security and “Christian values” of Europe.

The flow continued unabated on Friday over the border of EU neighbours Croatia and Hungary – between 5,000 and 8,000 per day in recent weeks, picked up by bus on the Hungarian side and driven north to Austria. The vast majority are trying to reach Germany.

With winter approaching and temperatures dropping, they now face being diverted from Croatia into Slovenia, like Hungary a member of Europe’s Schengen zone of passport-free travel, but which has warned it will not tolerate a major influx.

In Zagreb, the Croatian government said it had already agreed a plan with Slovenia to handle the flow of migrants when Hungary sealed the border.

“Croatian prime minister Zoran Milanovic is in contact with his Slovenian counterpart Miro Cerar. The Croatian government already has a plan agreed with Slovenia. In the event of Hungary shutting the border, Croatia will start implementing that plan in coordination with Slovenia,” the spokesman said.

The EU has agreed a deal, resisted by some of its members in eastern Europe, to share out 120,000 refugees, only a small proportion of the some 700,000 people expected to hit Europe’s shores this year.

At a summit in Brussels, the bloc offered Turkey a possible €3 billion in aid and the prospect of easier travel visas and “re-energised” talks on joining the bloc if it will help stem the flow of migrants across its territory.

But Hungarian foreign minister Peter Szijjarto said this fell short of Budapest’s demands, which include formation of a common force to protect the borders of Greece, where many arrive by boat and dinghy across the Aegean from Turkey before heading north through Macedonia and Serbia.

“Therefore, the national security cabinet decided that from midnight . . . Hungary will fully enforce the Schengen rules on the border with Croatia,” said Mr Szijjarto.

He said Hungary had informed Croatia, Slovenia, Poland, Slovakia, Austria, and Germany, and that migrants would be able to submit asylum requests at two so-called ‘transit zones’ to be set up on the border with Croatia.

A similar system in place on Hungary’s border with Serbia has seen asylum requests rejected en masse, slowing the flow of migrants to a trickle and drawing fire from the United Nations refugee agency and human rights groups, who say refugees are being denied their right to protection under international conventions. Those who try to breach the fence are rounded up, put on trial and in almost all cases expelled.

In Brussels, Slovenian Prime Minister Miro Cerar warned that his country, a former Yugoslav republic of two million people, would move to reinforce its own borders if others, such as Austria, were to try to stem the flow.

“We cannot allow Slovenia to be flooded by an uncontrolled number of refugees or migrants,” he said.

UK warned it could have 50,000 coronavirus cases a day by mid-October 12:19
Coronavirus: New Zealand to begin lifting restrictions 07:53
Hancock warns of second lockdown in Britain if public ignores Covid-19 rules 06:34
Thousands march in Bangkok in weekend of pro-democracy protests 20:40
US declares all international sanctions against Iran restored 20:12