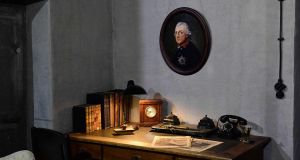 Johanna Ruf is the last survivor of Hitler’s bunker, although a dirty blouse prevented her from meeting the Nazi dictator personally.

Now aged 88, Ms Ruf has penned her memoirs recalling her wartime childhood in Berlin and the last days in the bunker beneath Hitler’s chancellery.

Ms Ruf was just 15 when, in 1945, she left school and, bowing to pressure from the Bund Deutscher Mädchen – the Nazi youth organisation for young girls – signed up as a paramedic.

After serving in a train station bunker she was reassigned as a nurse in the sprawling bunker adjacent to the Brandenburg Gate.

By spring 1945 this was the last bolt-hole of the dictator, known in Nazi parlance as the Fortress Defence Area. Ms Ruf was the youngest of about 30 medics stationed full time in the bunker, working around the clock in shifts lasting days at a time.

“Outside, everything that moved was shot, so we stayed overnight in the bunker,” she wrote.

In April 1945, Johanna and other medics were told that Hitler wanted to meet them, to thank them for their efforts. But the meeting never happened, she says, after leading Nazi officials deemed the nurses’ blouses too dirty.

“We washed our blouses so we could appear before Hitler, but then everything was cancelled,” recalled Ms Ruf.

There would be no second chance: days later the Nazi dictator took poison and shot himself in the head, ending the second World War.

She did get to meet his propaganda minister, Joseph Goebbels, who had also moved into the Führerbunker in the last weeks of the war with his family

“He came into the sick bay and, apparently to motivate us, said: ‘The final victory is at hand’,” said Ms Ruf. “But the only thing at hand were the Russians.”

Her most memorable bunker encounter was a row with a nine year-old boy.

“He was always cheeky to me so once I threatened to slap his face,” she wrote. “He said, ‘Go on’, so I gave him one.”

Days later she learned who she had smacked: Joseph Goebbels’ only son, Helmut. The night after their row he, along with his siblings, was poisoned by their mother, Magda.