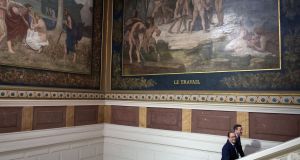 French president François Hollande has warned Britain about the “consequences” of a vote to leave the European Union.

“I don’t want to scare you,” Mr Hollande said at a joint press conference with British prime minister David Cameron in Amiens.  “I just want to say the truth.  There will be consequences if the UK leaves the EU, on the single market, in financial trade, in economic development between our two countries.  It doesn’t mean that everything will be destroyed . . . but there will be consequences, especially in terms of immigration.”

Mr Cameron and Mr Hollande met in Amiens to commemorate the centenary of the Battle of the Somme. Although they were 155km from Calais, the refugee crisis in the Channel port town dominated the France-Britain summit.

“When it comes to terrorism, when it comes to security, when it comes to our borders, we are better off, we are stronger, inside a reformed EU,” Mr Cameron told a press conference. He then alluded to Mr Macron, saying: “When you have ministers in other governments warning about a potential consequence that might happen, that would be injurious to the UK, I would say listen to those things.”

Asked about the €22 million in extra British expenditure for Calais this year, Mr Cameron said: “It is very important for people to know that if they come to Calais, that it is not a waiting room for getting into the UK.”

The summit took place as French labourers demolished shelters in the part of the Calais migrant camp known as the Jungle for a fourth day.

“I applaud the action the French government is taking to deal with the situation with the camps in Calais and to say to people that they should be seeking asylum in France and if they are not asylum seekers they should be returned to the countries from which they came,” Mr Cameron said.

The France Terre d’Asile association has identified 326 minors in the Calais Jungle, including 57 aged under 15.

“We have been clear with the British prime minister,” Mr Hollande said.  “When these youths have a family tie with the UK, they must be able to go there quickly and in an efficient way.”

A statement on migration by the two leaders announced “joint action of unprecedented proportions”. Britain contributed €82 million to securing the port and Channel Tunnel in 2015, it said. The additional €22 million this year will be used to support French security forces, move migrants from the camps to elsewhere in France and send migrants to countries of origin.