Hitler’s ‘Mein Kampf’ to be published again in Germany

‘Academic work’ by Institute of Contemporary History in Munich runs to 2,000 pages 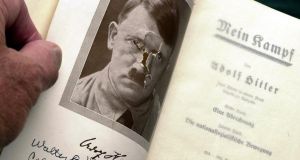 Written before Hitler came to power in 1933, Mein Kampf was a bestseller in Nazi times, with more than 12 million copies in circulation. Photograph: Glenn Asakawa/The Denver Post via Getty Images

Mein Kampf, in which Adolf Hitler set out the anti-Semitic and racist ideology behind his Nazi regime, is to be published in Germany next month for the first time since the end of the second World War, reigniting debate over one of the most controversial texts.

Publication of a scholarly version of the book, with the original text accompanied by voluminous academic notes, has been mostly welcomed by historians, but Jewish opinion has been divided.

German justice ministers have pledged to ensure that general public access to the text remains limited for fear of stirring neo-Nazi sentiment.

Aware of the sensitivities involved, the Institute of Contemporary History in Munich that will publish the new edition insisted it is bringing out an “academic work” far removed from any “irresponsible” uncritical publication of Mein Kampf.

Andreas Wirsching, the institute’s director, said the aim of the new version – which runs to 2,000 pages, with more than 3,500 academic notes – was to counter the influence of the uncritical originals in second-hand bookshops.

“I think our edition is there to challenge these editions,” he said yesterday. Up to 4,000 copies of the new version will be printed.

Thomas Krüger, president of the government’s Centre for Political Education, welcomed the publication of critical editions, saying it was important to break “the Mein Kampf taboo”.

He argued that objects which were not easily available generated “the desire to possess what is apparently forbidden”.

As copyright lasts for 70 years under German law, publishers will from January have free access to the original text. Aware the end of the copyright was looming, German justice officials last year agreed to prevent any “uncritical publicising” of Hitler’s work by means of anti-incitement laws.

The Central Council of Jews in Germany, the country’s leading Jewish organisation, did not return a call for comment. However, its website carries differing views on Mein Kampf.

In 2008 Stephan Kramer, general secretary at the time, welcomed plans for an academic edition. Four year later Dieter Graumann, the group’s then president, was less sympathetic. “I renounce the publication of this crazy book, which is soaked through with anti-Semitism and hate,” he wrote. “[But] if anybody has to read this book, then it is better to do so in the framework of parallel critical commentary [of the kind the historical institute will publish]”.