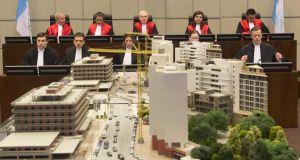 The judges in the courtroom of the Special Tribunal for Lebanon in The Hague. Photograph: Toussaint Kluiters / EPA

The huge explosion that killed Lebanese statesman Rafik Hariri and 21 others in 2005 was an act of terror meant to spread panic through the country, a prosecutor said at the start of a trial of four men charged with planning the attack. The four members of Lebanon’s militant Hizbullah movement are accused of murder, terrorism and orchestrating the blast on Beirut’s waterfront, which almost tipped the country back into civil war.

“The attackers used an extraordinary quantity of high-grade explosives, far more than was required to kill their main target. Clearly their aim was not to ensure that their target was killed, but to send a terrifying message and to cause panic among the population of Beirut and Lebanon, ” he added.

Hariri was killed in the deadliest of a series of attacks against critics of Syria’s military dominance in Lebanon. His death triggered public protest and led to the establishment of the UN-backed Special Tribunal for Lebanon, based in The Hague, where prosecutors laid out their case today.

Hariri’s Western supporters hailed the tribunal as a chance to close a long chapter of impunity in Lebanon, where bombers and assassins have operated since the 1975-1990 civil war with little prospect of facing justice in court. “I’ve been waiting for this for nine years ... But it’s just the beginning,” said Anna El Hassan, whose husband Wissam, a Hariri ally, was killed in a bomb blast in Beirut in 2012.

The bomb which killed the billionaire former premier also drove a wedge between Hariri’s Sunni Muslim community and Lebanese Shias loyal to Syrian-backed Hezbollah, whose members now stand accused the killing. That rift has been further poisoned by differences over Syria’s civil war, which has drawn Lebanese Sunni and Shia fighters onto opposing sides and has spilled over into deadly sectarian attacks in Lebanon’s main cities.

The four men jointly face nine charges and could be sentenced to life imprisonment if found guilty after proceedings expected to last years. “The evidence, including a considerable amount of telecoms data, leaves marks behind concerning the true identities of the perpetrators,” said Mr Farrell. A large scale model of the scene of the bombing showed the St George Hotel, in front of which a Mitsubishi van laden with up to 3,000kg of high-grade explosives detonated, leaving a massive crater and sending plumes of black smoke into the sky.

The trial is being held in a converted basketball court in the former headquarters of the Dutch intelligence services, a building with its own moat on the outskirts of The Hague.