Residents of Hamburg's St. Pauli's nightclub district are getting their own back on late-night revellers who urinate on public and private buildings, with a new hi-tech paint that sends the spray bouncing right back at them. Video: Reuters 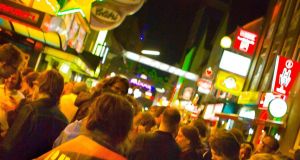 The Reeperbahn: Hamburg’s notorious party mile attracts some 20 million revellers a year, many of them beer drinkers. Photograph: Matias Boem

It is pee-back time on the Reeperbahn. Hamburg’s notorious party mile attracts some 20 million revellers a year, many of them beer-drinking men of the weak-bladdered variety. Now residents of the St Pauli neighbourhood, sick of starting their day with the biting stench of urine, have begun coating their walls with paint.

Not just any paint: a high-tech coating that guarantees the urine bounces on to the urinator. “Don’t pee here,” read the warning signs appearing around the district, “we pee back.” Policing and fines have had little effect, St Pauli residents say, forcing them to take a zero-tolerance approach to urine, vomit and other unwanted visitor souvenirs.

“They piss everywhere and it really is annoying,” said one man in an informational video. A 20-something woman added: “It’s particularly annoying when they piss in the playgrounds.”

The special “superhyperhydrophobic” coating goes by the trade-name “Ultra-Ever-Dry” and was originally developed in 2012 the the US company Resource Energy Group. It can be used to coat cars and fabrics, but can also wood and brick.

At €425 a gallon, the paint doesn’t come cheap, but Julia Staron, head of the St Pauli residents’ association, said it was better than paying for post-pee cleaning – and living with the stench in the interim. “We’ve coated many building façades with the paint and put up signs, but not every wall with the paint has a sign,” she said. “So be careful, from now on St Pauli pees back.”

Other cities in Europe and Australia have already taken an interest in the project. For now, though, it is exclusive to the Reeperbahn.

Hamburg’s most storied street now has a new attraction and a new look. Forget blue-suede: watch out in the sailor bars, discos and brothels for partygoers with pee-stained shoes.