Greeks wake up to shuttered banks and a climate of rumours

Country has less than 48 hours to pay back €1.6 billion in loans

The currnet Greek crisis has been developing for years and coming to a head for months now. Denis Staunton of The Irish Tmes, looks back to how they got here and major turning points in the crisis. Video: Reuters/ Enda O'Dowd 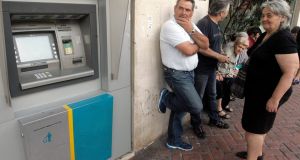 People wait outside a National Bank of Greece branch, in Athens, Greece this morning. Greece is imposing capital controls and ordering the closure of banks. Photograph: Orestis Panagiotou/EPA

Greeks woke up to shuttered banks, closed cash machines and a climate of rumours and conspiracy theories on Monday as a breakdown in talks between Athens and its creditors plunged the country deep into crisis.

After receiving no extra emergency funding for Greek lenders from the European Central Bank, prime minister Alexis Tsipras sombrely announced capital controls in a televised address on Sunday night to prevent banks from collapsing under the weight of mass withdrawals.

Greece has less than 48 hours to pay back €1.6 billion of International Monetary Fund loans, and a default would set in train events that could lead to the country’s exit from the euro currency union.

But after Mr Tsipras angered Greece’s international lenders by announcing a snap referendum next Sunday on the terms of a cash-for-reforms deal, hopes of a last-minute breakthrough are fading fast. Greeks reacted with a mixture of disbelief and fear.

“I can’t believe it,” said Athens resident Evgenia Gekou (50) on her way to work. “I keep thinking we will wake up tomorrow and everything will be OK. I’m trying hard not to worry.”

European officials sent confusing signals about their next move. A spokesman for the European Commission told French radio that Brussels would not make any new proposals on Monday, appearing to contradict comments by EU Economics Commissioner Pierre Moscovici. He said a new offer was forthcoming and that the two sides were “only a few centimetres” away from a deal.

European bank shares fell sharply on Monday. Top banks in Spain, France and Germany were down more than 6 per cent as the risk of a spillover to banks in other peripheral euro zone countries spooked investors.

The Greek government will keep banks shut at least until after July 5th, the date of the referendum, and withdrawals from automated teller machines - which are shut on Monday - will be limited to €60 a day when they reopen on Tuesday. The stock exchange will also stay shut.

Capital restrictions do not affect overseas visitors although tourists heading to Greece have been advised to take plenty of money so as to avoid problems with local banks.

After months of wrangling, Greece’s exasperated European partners have put the blame for the crisis squarely on Mr Tsipras’s shoulders. The creditors wanted Greece to cut pensions and raise taxes in ways that Mr Tsipras has long argued would deepen one of the worst economic crises of modern times in a country where a quarter of the workforce is already unemployed.

As Mr Tsipras announced the emergency measures late on Sunday, there were long queues outside ATMs and petrol stations as people raced to take out cash before it was too late.

“I’ve got five euros in my pocket, I thought I would try my luck here for some money. The queues in my neighbourhood were too long yesterday,” said plumber Yannis Kalaizakis (58) outside an empty cash machine in central Athens on Monday. “I don’t know what else to say. It’s a mess.”

Newspapers splashed pictures of long lines outside cash machines on their front page. The Nafetemporiki daily headlined Monday’s edition “Dramatic hours” while the Ta Nea daily simply said: “When will the banks open”. The conservative-leaning Eleftheros Typos newspaper accused Mr Tsipras of announcing the referendum as a ruse to tip the country into early elections in the hopes of winning them

. “Mr Tsipras’s decision to call a referendum and a possible euro exit constitutes a premeditated crime,” it said in an editorial. “It is clear that Mr Tsipras has lost the trust of citizens. That’s obvious from the queues at ATMs and petrol stations, and it will become obvious at next Sunday’s ballot.”

As rumours flew about, dozens of pensioners queued outside at least two offices of the National Bank of Greece on Monday after hearing they could withdraw pensions from some branches. They were turned away, Reuters photographers said.

“I’ve worked all my life, only to wake up one morning to a disaster like this,” said one shop owner, who was there to collect his wife’s pension.

Despite the financial shock, parts of daily life went on as normal, with shops, pharmacies and supermarkets in the city opening and Greeks meeting to discuss their country’s fate at cafes and restaurants. Tourists gathered as usual to watch the changing of the presidential guard outside parliament.

A rally to protest against austerity measures and urge voters to say “No” in the referendum on bailout terms is expected later on Monday. Despite the hardening of positions, officials around Europe and the United States made a frantic round of calls and organised meetings to try to salvage the situation.

US president Barack Obama called German chancellor Angela Merkel, and senior US officials including treasury secretary Jack Lew, who spoke to Mr Tsipras, urged Europe and the IMF to come up with a plan to hold the single currency together and keep Greece in the euro zone.

“While the programme is active until Tuesday, they aren’t providing the necessary liquidity for Greek banks just to blackmail and to terrorize us,” administrative reforms minister George Katrougalos told Antenna television.

“If we vote a yes, they will demolish pensions, you will have to pay for medicare in public hospitals. When your kids can’t go to school you will say ‘thanks’ and they will say ‘you asked for it’. “But if you say no you have the ability to fight for a better future.”