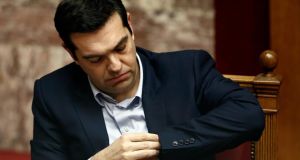 Greek prime minister Alexis Tsipras prepares to address lawmakers on Tuesday during a parliamentary session on the creation of a committee for claiming second World War reparations. Photograph: Reuters/Alkis Konstantinidis

Greece’s Syriza-lead government has turned up the heat on a long-simmering row with Germany, demanding that Berlin repay a multimillion outstanding loan extracted from Athens by occupying Nazi forces.

Greek justice minister Nikos Paraskevopoulos has threatened to seize German-owned property in Greece unless the matter his resolved, a demand that has overshadowed ongoing talks on an extension to Greece’s EU/IMF programme.

A spokesman for chancellor Angela Merkel insisted yesterday that, from a Germany perspective, all reparations and compensation questions with Greece “have been legally and politically solved”.

However, some German experts dispute Berlin’s open- and-shut reading of the case, suggesting it tricked its way out of repaying the Nazi- era loan.

Nazi forces marched into Greece on April 6th, 1941, killing tens of thousands of civilians, including many women and children. They deported another 60,000 civilians and up to 70,000 Greek Jews to concentration and death camps.

Nazi plundering resulted in mass starvation, with resulting death-toll estimates between 100,000 and 600,000. Disease caused a drop in the birthrate, hyperinflation destroyed the economy, and the war left Greek infrastructure in tatters.

At the 1953 London debt conference, however, Germany secured a write-down on its first World War debt and postponement of second World War debts until an official peace agreement was signed to end the conflict – and German division.

Germany denies any bills are outstanding, pointing to two separate reparations deals that saw over €2 billion paid to the Greek state and victims of Nazi aggression – closing the book on reparations.

Some leading German experts say these payments do nothing to address the uniqueness of the Greek case: the loan extracted from the Greeks to finance the Nazi occupation.

For decades the Athens- based German academic Hagen Fleischer has assembled documents that he says make clear that, to the end, Nazi Berlin viewed this as an outstanding loan.

A document from early 1945 titled For future use: remaining debt of the Reich to Greece mentions a figure of 476 million reichsmark, or US$228 million in contemporary exchange rates. Fleischer found a similar document in Greek archives citing US$238 million.

He also uncovered a 1969 West German foreign ministry memo warning of the “virulent covetousness of our current partners and former enemies” on the reparations.

To date, the document said, repayments had been postponed thanks to the 1953 London debt agreement and the efforts of the US government. The recommendation: Germany’s “opponents in the last war” are to be “put off ad kalendas Graecas” – effectively to the day when pigs fly.

“It has to be in our interest to preserve this in-between situation for as long as possible in light of the outstanding peace treaty,” the memo concludes, “to then put off repayments [citing] forfeiture through time limitations.”

Fleischer says this is precisely what happened. The West German ambassador to Athens said in 1988 that the forced loan was frozen because of ongoing German division, while the Bonn foreign ministry in 1990 issued a 26-page memo to embassies filled with arguments as to why the claim had expired.

No peace in treaty

“What’s not clear to me is: when was the right moment for Greece to raise this issue?” said Fleischer. “From a German perspective, it was always either too soon or too late.”

In 2012, the international criminal court in the Hague dismissed a challenge by a private Greek group, saying the principle of state immunity left them unable to sue Germany.

Though the court urged Greece and Germany to engage in talks to resolve the matter, Athens says Berlin isn’t interested in talking.

The nod to today’s burdened bilateral relationship is clear: Greece may owe Germany more than €60 billion in EU/IMF loans. But, when it comes to unsettled accounts between Athens and Berlin, Tsipras believes he has the Bible on his side.

“I am reminded of the famous passage from the Sermon on the Mount,” he told parliament, “when Jesus says: ‘They see the spike in their brother’s eye, but not the pole in their own.’”

1 US supreme court rules grand jury can obtain Donald Trump’s financial records
2 Mother and five children sleeping in car while seeking accommodation
3 Donald Trump is an amateur populist – the real trouble is yet to come
4 Six counties register no coronavirus case over past week
5 Covid-19: Small minority of pubs putting health of customers and staff ‘at risk’
Real news has value SUBSCRIBE