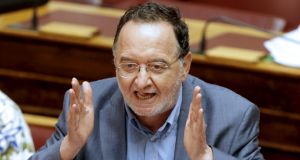 Rebels opposed to Greece’s international bailout walked out of the leftist Syriza party on Friday, formalising a split after its leader Alexis Tsipras resigned as prime minister and paved the way for early elections.

Greece’s president gave the conservative opposition a chance to form a new government following Mr Tsipras’s resignation on Thursday, but the country appears almost certain to be heading for its third election in as many years next month.

Mr Tsipras is hoping to strengthen his hold on power in a snap election after seven months in office in which he fought Greece’s creditors for a better bailout deal but had to cave in and accept more onerous terms.

One day after money began flowing from Greece’s third bailout programme, a much-needed period of political and economic certainty remained as elusive as ever, drawing concerned calls from the euro zone that Athens must stick to commitments given under the rescue deal.

Far-left Syriza members, who oppose the promises of yet more austerity and economic reform that Tsipras made to secure €86 billion in bailout loans, broke away to form a new party.

A deputy speaker of parliament announced the new party would be called Popular Unity and headed by former energy minister Panagiotis Lafazanis, who was fired by Mr Tsipras earlier this year for refusing to back the government.

With 25 MPs, the party would be the third largest bloc in Greece’s 300-seat parliament ahead of the centrist To Potami and far-right Golden Dawn parties, which each have 17 MPs. Syriza had 149 before the split.

One of the new party’s members, MP and economist Costas Lapavitsas, noted Greeks had voted overwhelmingly in June against a bailout deal offered by the euro zone and IMF. But soon after the referendum, Mr Tsipras performed a U-turn to save the financial system and Greece’s future in the euro zone.

“We want to give a voice to the 62 per cent of the people who said ‘No’ and do not want bailouts,” Mr Lapavitsas told ERT TV. “We see strong support from the people who feel betrayed.”

The walk-out may allow Ms Tsipras to move Syriza a little closer to the political centre and broaden his appeal among voters, which remains strong despite Greece’s near-brush with financial collapse under his premiership.

However, some voters were unhappy with the move to force elections. “It is, of course, wrong. And we citizens will suffer the consequences, because we will go through a period of insecurity,” Athens shop owner Konstantinos Poulopoulos said.

Mr Tsipras had long been expected to seek early an election in the autumn. But he was forced to move quickly after nearly a third of Syriza’s lawmakers refused to back the new bailout programme in parliament last week, robbing him of his majority.

Other voters were willing to give Mr Tsipras the benefit of the doubt. “He had to do something to ensure that the government is viable,” said programmer Christianos Misailidis, but added: “Right now, it is as if there is no government.”

Outgoing deputy finance minister Tryfon Alexiadis said only an election could stabilise Greece. “Elections surely have an indirect cost ... but will clear things up so we can move ahead,” he told the state TV channel ERT.

In accordance with the constitution, President Prokopis Pavlopoulos formally invited conservative leader Vangelis Meimarakis on Friday morning to try to form a new government without the need for a new elections.

However, his New Democracy Party has just 76 members of parliament and is almost certain to fail to find enough partners among an opposition that ranges from the KKE communists to the ultra-right Golden Dawn party.

If Mr Meimarakis has no coalition agreement within three days, the constitution says the next biggest party should be given a chance. This would be the new leftist party, which said it would also seek a mandate to try to form a government. However, an election remains a near certainty.

Mr Tsipras was forced to accept the creditors’ demands including further pension cuts, more value-added tax increases and a “solidarity” tax on incomes - the very kind of policies he had promised to scrap when he was elected in January.

Under his leadership, he had to close the banks for three weeks as panicking savers pulled billions from their accounts, and strict curbs on withdrawals from the banking system remain, badly hurting business.

Despite all, Mr Tsipras remains popular although no opinion polls have been taken for almost a month, and he appears to have no serious rivals to prevent his return to power.

Across the euro zone, politicians warned Greece to stick to its promises.

“The Greeks have no alternative. They know the new package will stop immediately if commitments are not met. Even if a new government was elected it couldn’t change anything,” Michael Fuchs, a leading German conservative told Italy’s Corriere della Sera newspaper. “It’s up to them to decide.”