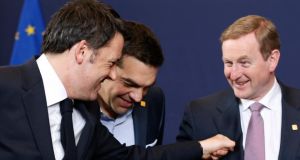 Greek prime minister Alexis Tsipras has yielded to an intensive euro zone clamour for fresh talks on his country’s bailout programme in a bid to unlock a new round of funding from international creditors.

Mr Tsipras had refused since taking office to accept the continuation of the programme, which expires on February 28th.

After a standoff with finance ministers, however, he authorised talks tomorrow with the country’s EU lenders.

The move, seen as a big political climbdown, followed an unscheduled meeting in Brussels between the Greek leader and Jeroen Dijsselbloem, the Dutch minister who chairs the group of euro zone finance ministers.

The objective is to develop a solution to the impasse between Greece and its creditors before the ministers return to the Belgian capital for more talks next Monday.

It is understood that officials from the European Commission, the European Central Bank and the International Monetary Fund will travel today to Athens for talks.

The move comes despite Mr Tsipras’s insistence that Athens would no longer engage with the troika of lenders. Even as officials in the troika bodies prepared for the talks, the Greek leader insisted tonight in Brussels that “the troika no longer exists”.

The manoeuvre came less than 24 hours after finance ministers failed to settle a joint statement on the next stage for Greece, which faces a multibillion-euro funding shortfall within a fortnight.

EU leaders want Greece to continue the current programme but Mr Tsipras is pushing for “bridging” loans without the policy conditions attached to the programme itself.

After the summit he acknowledged that both sides “need to find common ground between [the] current and bridge programme”.

Mr Tsipras struck a positive tone on his arrival in Brussels, meeting the British, Belgian and Latvian leaders before his first EU summit.

He had received short shrift in advance of the talks from many other leaders, German chancellor Angela Merkel among them.

After the summit the chancellor said she hoped to see “motions” soon to continue the Greek programme.

“He gave us a general presentation,” said Dr Merkel of Mr Tsipras.

“This has to be now specified more, and I believe that the respective institutions are waiting for this not happening too late.”

“There’s a very strong willingness within the European Council to work with Greece and with the new government in Greece to find a way forward here,” the Taoiseach said.

He added, however, that there had been “a very strong view also that rules have to be adhered to , and from that point of view the discussions over the weekend are accepted by everybody as being very technical and very complex.”

Mr Kenny said Mr Tsipras had set out his views as to what he wants for “his country and his people” for the first time in formal council setting.

The Taoiseach said the Greek leader pointed out that there had been an election and a change of government in Greece and this should be “reflected and recognised.”

Mr Tsipras had also said that “where there are contracts, they have to be honoured”.