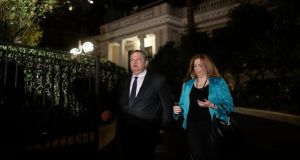 Meeting for crisis talks for the third time in four days, the leaders of Greece’s tripartite coalition reached breaking point yesterday evening after they again failed to bridge their differences over the fate of the country’s national broadcaster ERT, whose shuttering last week has battered the viability of the government.

The junior coalition partners – centre-left Pasok and Democratic Left – insisted that conservative prime minister Antonis Samaras agree to resume ERT transmissions immediately, with the same staff, until a restructuring plan can be agreed.

Fotis Kouvelis, who leads Democratic Left, expressed his frustration that ERT remained off the air, despite a supreme court ruling on Monday ordering its temporary reopening.

“It is not our responsibility that no common ground has been found,” he said before an emergency session of his parliamentary party. Mr Kouvelis stopped short of declaring he would withdraw his support for the government unless Mr Samaras accepted his bottom line.

Democratic Left supports two cabinet ministers and one junior minister in the government. The three are not members of the party, however.

Speaking from his party headquarters, Pasok’s Evangelos Venizelos said there were severe problems in the functioning of the coalition, following the “unilaterial action” of New Democracy to shut down ERT, but added that Mr Samaras had considered his compromise to allow ERT reopen with 2,000 staff, instead of its current 2,656. “The situation for the economy, country and the people is critical,” he said.

Mr Samaras gave no statement but summoned his ministers to his office for an emergency meeting.

Local media were reporting that Pasok would be able to reach a compromise with Mr Samaras. The parties command a combined 153 MPs, a majority of two. Late last night, a number of independent MPs indicated they would support a two-party government.

Essex lorry deaths: Members of Irish-Romanian gang get jail terms up to 27 years

Essex lorry deaths: Members of Irish-Romanian gang get jail terms up to 27 years 15:00
Wedding with 400 guests discovered at north London school 12:35
Indian city looks to facial-recognition system to combat harassment of women 09:43
Google threatens to pull search engine in Australia in stand-off with government 07:35
Covid-19: Proposed £500 payout for anyone testing positive in England 07:34

2 Essex lorry deaths: Members of Irish-Romanian gang get jail terms up to 27 years