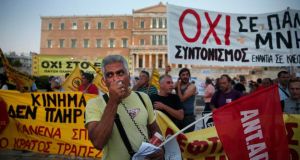 Demonstrators gather outside the Greek parliament during an anti-austerity rally in Athens on Wednesday evening, as MPs voted on a second package of emergency legislation demanded by Greece’s creditors. Photograph: Alkis Konstantinidis/Reuters

Amid demonstrations on the streets outside and protests from their own parliamentary speaker that the legislation before them on represented a “violent attack on democracy”, Greek MPs were set to pass a second package of emergency legislation demanded by Greece’s creditors on Wednesday evening in order to commence talks on a third, €86 billion bailout for the over-indebted country.

Accusing some of Greece’s fellow EU members of “blatant blackmail”, the speaker, Zoi Konstantopoulou, said the Bill, which contained two articles and ran to 977 pages, was “not in compliance with the constitution”.

“This violent attack on democracy should not occur within the European Union. And it certainly cannot be accomplished in silence,” Ms Konstantopoulou stated, in a letter sent to the country’s president and its prime minister, Alexis Tsipras.

An MP with Mr Tsipras’s party, Ms Konstantopoulou was among 39 Syriza MPs who failed to support the government when the first package of measures came before the parliament last week.

The speaker and many of the dissenters were set to vote against the government for a second time in a week, despite a strongly worded warning from Mr Tsipras on Tuesday about party colleagues making “heroic statements” but offering “no alternative proposal for the blackmailing dilemma” he claims to have faced on July 12th in talks with EU leaders.

“I’m fully aware that I undertook the responsibility for a very difficult compromise. A compromise, however, that keeps us alive so as to continue fighting,” Mr Tsipras was quoted in a non-paper issued to the press.

He warned the dissenting Syriza MPs that they “should not hide behind the security of my own signature”.

Attention on Wednesday night was focused on whether other Syriza MPs would join the dissenters in voting against the government, which could trigger early elections, which are considered likely in any case.

The legislation is almost certain to pass given that three mainstream opposition parties – conservative New Democracy, centrist Potami and centre-left Pasok – said in advance that they would support the government. Only the neo-Nazi Golden Dawn and communist KKE parties vowed to oppose the legislation.

Included in the Bill was a new civil procedure code, one of two prior actions demanded by country’s creditors to officially open talks on a new, third bailout for Greece. The proposed code, which runs to 1,008 articles, is designed to speed up the justice system but was rejected by 93 per cent of lawyers voting in a nationwide ballot conduced last December.

The rest of the Bill covers the EU’s bank recovery and resolution directive for dealing with failed banks.

As MPs debated the bumper Bill, a number of demonstrations took place outside on Syntagma square. Among the various political groups who had turned out where representatives from private tuition schools – a significant sector that makes up for shortcomings in the education system – who are protesting against the imposition of VAT (of 23 per cent) on the sector for the first time.