Greek MP alleges he was offered bribe for vote 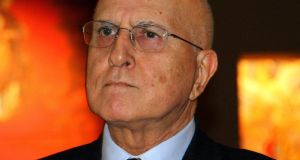 The party of the Greek prime minister has said it is the target of a “staged provocation” following fresh allegations from an opposition MP who claims he was offered up to €3 million to back the government’s candidate in the country’s presidential race.

The new bribery claims were made on Friday by Pavlos Haikalis, a deputy with the nationalist anti-bailout Independent Greeks party.

Mr Haikalis told a breakfast television news programme that he was offered €700,000 in cash and a settlement of his bank loan as well as contracts with advertising firms if he broke his party’s whip and voted with the government in the presidential election.

On Wednesday, the first of three possible attempts to elect a new Greek president failed when the coalition government only garnered the support of 160 of the 180 MPs it will need by the third and final round of voting, on December 29th.

Mr Haikalis, a former soap opera actor, is not the first MP to allege a cash-for-votes offer. An investigation is under way into claims from a fellow MP in the Independent Greeks party that she was offered up to €3 million via Facebook messages. But he is the first to claim to have recordings as evidence.

CDs purporting to contain secret audiovisual footage were subsequently held up, but not played, at an Independent Greeks press conference. There Mr Haikalis and his party leader, Panos Kammenos, elaborated on the allegations, saying a middleman offered the bribery package over two meetings with the MP earlier this month.

They said the alleged intermediary, later named by the Greek media as financial consultant George Apostolopoulos, failed to show up at a third meeting, where a police sting operation had been put in place after Mr Haikalis approached prosecutors.

Mr Kammenos later sent copies of the CDs to the justice minister and parliamentary speaker, saying that if they didn’t make the recordings public before the second attempt to elect a new president, then he would publish them.

The latest bribery allegations were dismissed by prime minister Antonis Samaras’s New Democracy party, which said that Mr Apostolopoulos had served as a past adviser to Mr Kammenos. Photographs later appeared in the media showing Mr Apostolopoulos sitting beside Mr Kammenos at a meeting in 2013 with Syriza leader Alexis Tsipras.

“A group of conspirators is trying to blackmail MPs into not voting for president and cause a political anomaly by cheapening institutions,” said a New Democracy spokeswoman. “Democracy cannot be blackmailed. The Syriza–Independent Greeks alliance should understand that.”

In a statement, Mr Apostolopoulos, the alleged briber, said he was being implicated “in political vendettas, motivated by fraudulent party interests. This is a theatrical police scenario starring an experienced comic actor and director and a frantic showman political leader.”