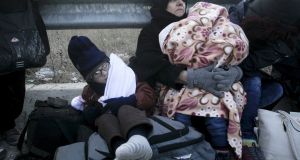 Syrian refugees rest next to a highway as a group of more than 100 Syrian refugees who crossed the Greek-Turkish borders the previous night is stopped by Greek police near the village of Thourio at the regional unit of Evros in northeastern Greece. Photograph: Alexandros Avramidis/Reuters

Greece has hit back at European proposals for tightened security on its northern border with Macedonia, describing the latest plans to staunch the flow of refugees into Europe as a dangerous experiment that would turn the country into a “cemetery of souls”.

The proposals to dispatch joint police forces along Macedonia’s border with Greece – first proposed by Miro Cerar, prime minister of Slovenia, in a letter to fellow EU leaders last week – gained political momentum after the European Commission threw its weight behind the plan.

The plan seeks to shift the frontline of Europe’s refugee control efforts to the northern part of Greece, where the government is already straining to manage the influx with limited resources. Some 2,000 migrants are arriving in the EU each day.

But Ioannis Mouzalas, Greece’s minister for migration, said ringfencing Greece from the Schengen zone would not stop asylum seekers making their way to northern Europe, adding that Athens had not been consulted on the plan in advance.

“We do not intend to become a cemetery of souls here. We cannot understand what kind of policy it is that a country would close its borders with Greece,” Mr Mouzalas said. “We do not have time to experiment with things that will only worsen the trauma.”

EU justice ministers meeting in Amsterdam were due to discuss the Macedonia plan after repeated demands that Athens do more to control the influx of migrants on to its territory. They requested permission from the European Commission to extend border controls within the passport-free- travel Schengen zone for up to two years.

Border controls have been in place across much of central Europe since the autumn. While member states are allowed to do this for up to six months, special permission is required to extend this for an additional two years.

A procedure to grant two more years of internal border checks could also be used to suspend Greece from Schengen membership altogether.

“Greece must increase its resources as soon as possible and accept help,” she said.

Slovenia last week claimed the proposal to beef up controls at the Greek-Macedonia border would allow an end to internal border controls introduced temporarily elsewhere in the EU. It said it had received backing from central European countries, including Hungary and Poland.

The plan has caused alarm in Greece and are especially contentious because Macedonia is not an EU member state and has troubled relations with its southern neighbour – Athens has blocked the country’s Nato accession in a dispute over its official name.