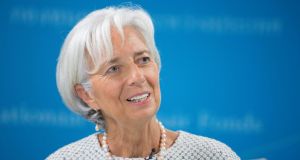 IMF chief Christine Lagarde on Friday night said in a statement: “I remain firmly of the view that Greece’s debt has become unsustainable and that Greece cannot restore debt sustainability solely through actions on its own.” File photograph: Stephen Jaffe/EPA

Saying Athens could not put its fiscal house in order on its own, Ms Lagarde said in a statement: “I remain firmly of the view that Greece’s debt has become unsustainable and that Greece cannot restore debt sustainability solely through actions on its own.

“Thus, it is equally critical for medium and long-term debt sustainability that Greece’s European partners make concrete commitments in the context of the first review of the ESM programme to provide significant debt relief, well beyond what has been considered so far.”

After six hours of talks in Brussels, euro zone finance ministers gave their final blessing to lending Greece up to €86 billion after the Athens parliament agreed to stiff conditions overnight.

“The eurogroup considers that the necessary elements are now in place to launch the relevant national procedures required for the approval of the ESM financial assistance,” the ministers said in a statement.

Assuming final approval next week by the German and some other national parliaments, an initial tranche of €26 billion would be approved by the European Stability Mechanism (ESM) next Wednesday.

Of that, €10 billion would be reserved to recapitalise Greek banks ravaged by economic turmoil and the imposition of capital controls in June, and €13 billion would be in Athens on Thursday to meet pressing debt payment obligations.

Some issues still need to be ironed out following a deal struck with Greece on Tuesday by the European Commission, European Central Bank and International Monetary Fund.

They include keeping the IMF involved in overseeing the new euro zone programme while delaying satisfying the fund’s calls for debt relief for Greece until a review in October.

Ms Lagarde, who took part in the meeting by telephone, made clear she could give no commitment before approval by the IMF board in October, eurogroup president Jeroen Dijsselbloem told reporters.

He said he was optimistic of IMF involvement but that it would be conditional on the board seeing more detail on Greek reforms after a first review of implementation of the programme and an assessment that Greece’s public debt was sustainable.

After debating all night, the Greek parliament gave its backing to prime minister Alexis Tsipras, though he had to rely on opposition votes after nearly a third of his own supporters rebelled, forcing him to consider a confidence vote that could pave the way for early elections.

After defeating conservatives in January, Mr Tsipras remains hugely popular for standing up to Germany’s insistence on austerity before capitulating to new bailout terms under the threat of a euro zone exit.

He would be expected to win again if snap polls were held now, given an opposition in disarray.

The Washington-based IMF, which has lent to Greece itself and played a role in supervising the implementation of two previous bailouts worth a total of €240 billion, has urged the other 18 states of the euro zone to give Athens debt relief in order to help revive its crippled economy.

Many euro zone governments have ruled out any “haircut” on the nominal amount of debt - something against current euro zone rules - and have questioned the IMF assessment of how much relief Greece needs, saying it is too pessimistic.

However, the bloc is keen to have the IMF, whose imprimatur is prized in financial markets, closely involved in managing the Greek programme. Dijsselbloem said lenders would have a debate on debt sustainability in October and indicated that differences between the IMF and euro zone on the issue were narrowing.

The euro zone has agreed to look at easing terms, such as by lengthening repayment deadlines, once a first review of Greek compliance with conditions is completed in October. The IMF, though, has made clear it sees debt relief as essential for giving the Greek economy the means to service the new loans.

Under the last, cancelled, programme, Greece was due to receive €16 billion from the fund and euro zone states hope for a similar sum.

“There’s a bit of a Catch 22 that we need to solve,” said Finnish finance minister Alexander Stubb, whose government was among those most ready to favour a Greek exit from the euro before a last-minute deal struck by EU leaders a month ago.

“The IMF is on board as concerns programme conditionality,” said Valdis Dombrovskis, the European Commission’s vice-president for the euro. “We know that IMF has its own programme, but we do not expect a formal decision on this today.”

On Thursday, Delia Velculescu said after leading the IMF team at negotiations in Athens: “We look forward to working with the (Greek) authorities to develop their programme in more detail and for Greece’s European partners to make decisions on debt relief that will allow Greece’s debt to become sustainable.

“The IMF will remain closely engaged with the Greek government and the European partners to assist in this process, and will make an assessment of its participation in providing any additional financing to Greece once the steps on the authorities’ programme and debt relief have been taken.”

“We’re going to talk about political trust,” Mr Dijsselbloem said earlier in the day. “That’s still a factor of course with Greece: can we trust that it’s actually going to happen?

“If it appears that in reality nothing is happening, then the programme will be halted again very quickly.”