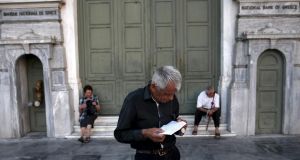 A pensioner waits to receive part of his pension at a National Bank branch in Athens. Euro zone leaders clinched a deal with Greece on Monday to negotiate a third bailout to keep the near-bankrupt country in the euro zone after a whole night of haggling at an emergency summit. Photograph: Yiannis Kourtoglou/Reuters 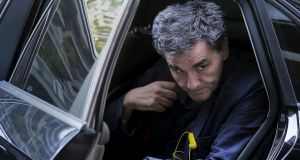 Greek prime minister Alexis Tsipras is battling to convince members of his government to back a third bailout offered by euro zone leaders after marathon talks over the weekend.

Four pieces of legislation must be passed by Wednesday night including significant changes to pensions and VAT reforms in order for talks on the bailout to proceed.

Defence minister Panos Kammenos, a junior coalition partner, has said he will provide only limited backing. If the deal fails, Greece’s banks face collapse and the country could then be forced to leave the euro.

With dozens of MPs in his Syriza party threatening to defect, Mr Tsipras will need the support of the opposition to pass the package.

A number of the prime minister’s allies have suggested he could sack prominent rebels such as energy minister Panagiotis Lafazanis, who said the deal was “humiliating” and should be rejected.

The International Monetary Fund (IMF) announced early on Tuesday that Greece had gone further into arrears by missing a debt repayment for the second consecutive month.

Separately, an IMF report has said Greece will need debt relief far beyond what euro zone partners have been prepared to consider due to the devastation of its economy and banks in the last two weeks.

The confidential debt sustainability analysis by the IMF was sent to euro zone governments late on Monday, hours after Athens and its 18 partners agreed in principle to open negotiations on a third bailout programme of up to €86 billion in return for tougher austerity measures and structural reforms.

“The dramatic deterioration in debt sustainability points to the need for debt relief on a scale that would need to go well beyond what has been under consideration to date - and what has been proposed by the ESM,” the IMF said, referring to the European Stability Mechanism bailout fund.

European finance ministers of all 28 member states are meeting in Brussels on Tuesday to discuss short-term financing for Greece.

They are trying to find a way of keeping Greece from defaulting on debt repayments to the European Central Bank (ECB) next week, with up to six options on the table but none that is problem-free.

According to the IMF, Greece has missed a payment of €456 million due on Monday and now owed €2 billion, the Washington-based fund said.

One this is paid Greece needs to find another €3.5 billion by Monday to redeem its maturing credit from the ECB.

Speaking on his way into the meeting the chairman of euro zone finance ministers Jeroen Dijsselbloem said the issue was “full of traps and snares”.

“We’re looking at all the instruments and funds that we could use and all of them seem to have disadvantages or impossibilities or legal objections so we’re still working on it,” he said.

European shares edged lower on Tuesday after a four-day rally amid uncertainty over whether the measures would be passed in time.

No budgetary implications for Ireland

Minister for Finance Michael Noonan has said there will be no immediate budgetary implications for Ireland if a third bailout for Greece is agreed. However, the State is expected to incur a liability of over €1 billion as money it has already put in to the European Stability Mechanism (ESM) fund is used as part of the bailout funding.

Speaking on Tuesday, Mr Noonan said Ireland would be contributing to a bailout for Greece via its participation in the ESM fund.

“It’s an ESM programme, and since we have fully contributed to the ESM, we won’t be putting up any additional money up front so there will be no budgetary implications, but of course if things were to go wrong down the road, we are incurring liability, but it’s being incurred in respect of our contributions to the ESM.”

“Our key is 1.8 per cent of the totality so you can run the numbers. Of course the IMF will also be a contributor. . . and we’re fully up to date with our contributions to the IMF as well.”

While the overall size of the bailout is not finalised, it looks set to be over €80 billion, the bulk of which will come from the ESM, to which Ireland has contributed just over €1.25 billion to date.

Taoiseach Enda Kenny said on Tuesday that delaying an agreement with its European creditors has cost Greece dearly.

Mr Kenny said he hopes an €80 billion-plus fund will get the country “back on its feet”.

Minister for Public Expenditure and Reform Brendan Howlin said the delay in striking a deal with creditors has “compounded” Greece’s problems.

He said the Greek economy was “wounded” and its banks would probably need to be further recapitalised when they re-opened.

“There is no doubt that the two weeks of the bank closure has been a very, very painful exercise for Greece.”

However, he said the Irish people wanted to stand with the Greek people.

“I believe there is a view that we should contribute to the support of Greece yet again.”

Greece’s ailing banks are due to remain closed at least until Thursday, but their prospects of staying afloat received a boost on Monday when euro zone governments agreed to a request from the European Central Bank to provide €10 billion in guarantees so as to enable Frankfurt to maintain or increase its emergency funding to the Greek banks.

That would allow the banks to reopen soon, though capital controls are expected to remain in place for a number of months.

US president Barack Obama spoke to the leaders of Germany, France, and Britain on Tuesday about the Iran nuclear agreement and the financial deal between Greece and its European creditors, the White House said.

The leaders called the nuclear pact with Iran a “historic solution,“ the White House said in a statement.

o welcomed Monday‘s agreement between Greece and its creditors,“ it said. “The president noted that the agreement is a positive step that could help to underpin a return to growth and debt stability in Greece, but that further work will be required.