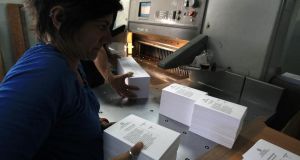 The Greek debt crisis took a dramatic turn yesterday, as Greek prime minister Alexis Tsipras announced he was seeking a third bailout for his country ahead of Sunday’s proposed referendum.

In Brussels, rumours of an 11th-hour deal had been rife throughout the day. A diplomatic offensive to try and re-engage Greece with lenders had been evident on Monday, as European Union leaders, from French president François Hollande to eurogroup chairman Jeroen Dijsselbloem, queued up to tell Athens the “door was still open” to further discussions.

On Monday night European Commission president Jean- Claude Juncker spoke with Mr Tsipras on the phone, and again yesterday morning. Discussions between Mr Juncker’s officials and representatives of the Greek government continued throughout the day by phone.

But despite rumours that a “new” deal was on the table, officials confirmed at lunchtime that the proposal being discussed was the same as that on offer to Greece on Friday and which the commission published on Sunday.

Mr Juncker had already flagged the €35 billion “investment package” in early June as a way of enticing Greece to back the negotiations, reflecting in part frustration in the commission that Greece is not drawing down all the non-bailout funds it is entitled to access.

By early afternoon there were rumours that Mr Tsipras was preparing to fly to Brussels for talks. Instead he applied to the euro-zone institution that manages the bailouts, the European Stability Mechanism, for a new bailout.

In his two-page letter, which was considered by the eurogroup of finance ministers last night, he requested €29.1 billion in funding over two years, as well as a temporary extension of the second bailout which expired yesterday, as well as a promise of debt restructuring.

German chancellor Angela Merkel’s indication yesterday that a third bailout would be considered only after Sunday’s referendum was a typically canny move. By predicating the promise of a further rescue package on the outcome of the ballot, Merkel and others were tacitly warning the Greek populace that further funds could not be guaranteed if voters voted No to the bailout package.

The focus of the coming days is likely to be the domestic political dynamics in Greece and the European Central Bank’s next move. While the decision by Mr Tsipras to request a third bailout was in some ways a clever political move – by being able to show to his electorate that he applied for an extension at the very last minute, he can blame the EU side for the lack of progress – whether he will survive as leader is highly questionable, particularly if the populace votes Yes on Sunday.

Questions for the ECB

Both the expiration of Greece’s second bailout programme and the country’s failure to meet its IMF repayment could technically trigger further action by the ECB. Under the terms of the bailout programme, a non-payment to one of the troika creditors can be considered as a non-payment to all, and could trigger retaliatory action from other creditors.

More significantly, the fact that Greece finds itself without a bailout programme will allow the ECB to halt liquidity assistance to the Greek banking sector or increase the haircuts on the collateral the Greek banks use to draw down emergency funds, both of which would have catastrophic effects on Greek banks hit by falling collateral and deposits.

A €3.5 billion repayment to the ECB falling due in just under three weeks’ time is also looming. ECB president Mario Draghi has already had to work hard to convince some members of the bank’s governing council, particularly Bundesbank chief Jens Weidmann, that the bank has not been acting outside its mandate in keeping the Greek banking sector afloat with emergency funding.

The developments of the last few days will undoubtedly make that task even more difficult.

Once again, the future of the bailout of a euro-zone memberis likely to be decided in Frankfurt.

1 Aer Lingus staff say they are living in ‘near poverty’ and unable to cover rent
2 Covid-19: Warning of similar measures for other counties as Donegal moves to Level 3
3 Madrid vs New York: A tale of two cities during Covid-19
4 Man found guilty of murder of Ciara Glennon and second woman in 1990s
5 Séamus Woulfe: The last man standing in Golfgate is set to learn his fate
Real news has value SUBSCRIBE