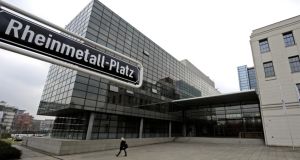 Defence contractor Rheinmetall’s headquarters in Düsseldorf. Although company managers have escaped a conviction for bribery, the case sends a signal for other investigations into corrupt armaments deals. Photograph: Getty Images

The fine is the first of its kind imposed on a German armaments company and comes amid a wider investigation into one of Germany’s most influential and secretive industries.

The case involves a deal brokered a decade ago by Rheinmetall Defence Electronics (RDE), a Bremen-based subsidiary of the Düsseldorf concern, to sell an “Asrad” air-defence system to the Greek army for €150 million. Central to the deal was a Greek middle man and former Greek marine officer named Papagiotis Efstathiou.

Mr Efstathiou admitted to German investigators using RDE money to make regular payments between 1998 and 2011 to ministerial and military officials in Athens.

The Greek middle man insisted RDE officials had put pressure on him to effect the bribes and estimated that about half of €20 million paid to him by RDE had gone on illegal payments to secure the deal.

Rheinmetall said it accepted the ruling after the fine was imposed and promised that new antibribery controls had been put in place. In future, the company said, it would rather let a deal pass the company by than allow such practices to recur.

“Mistakes were made at Rheinmetall for which we take the blame,” chairman Armin Papperger told the newspaper Süddeutsche Zeitung. “It would have brought nothing to beat around the bush.”

In addition, the company faces a back payment of €6.4 million to the German tax authorities for setting off the bribes against its tax bill. The total cost of the fine, about €43 million, represents 0.9 per cent of the company’s 2012 turnover of €4.7 billion.

By accepting the fine, investigators have agreed to close their case against the company, avoiding a court case.

The company denied the charges initially but, an unnamed company source told Der Spiegel, had a change of heart after several raids of RDE premises in Bremen.

It decided to accept the fine rather than let the case go to court, a step the company reportedly viewed as “counterproductive”.

Though Rheinmetall managers have escaped a conviction, the case sends a signal for other investigations into corrupt armaments deals.

Earlier this year a former civil servant in charge of purchasing at the Greek defence ministry admitted pocketing €13 million over 20 years for backing about a dozen projects.

Antonios Kantas, the former civil servant, claimed to have received €1.5 million from Rheinmetall for green- lighting the purchase of the air-defence system and an upgrade of Greek submarine electronics.

German tank manufacturer Krauss-Maffei Wegmann allegedly paid him €600,000 for supporting the purchase of 170 tanks at a cost of €1.7 billion.

He received a similar amount, the official said, by backing the purchase of German submarines from Kiel- based company HDW.