From destruction to peace prizes, Swedish model is clash of ideas 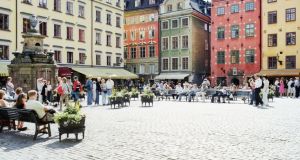 Stockholm: Sweden’s liberal society is feted as a western exemplar, but behind it lurk the usual conflicts

There has been an explo- sion in the Vinterviken dynamite factory. Someone has dropped a glass and it shattered into 50 pieces on the floor of the former premises of Alfred Nobel, the inventor who in later life gave most of his wealth to establish prizes for peace, science and literature.

The brick building has been converted into a restaurant and cultural centre. All around are the hills, rock faces, lakes, forests and islands that define Stockholm. Images on its stark walls depict fat honey jars of nitroglycerine part-buried in the soil outside.

Back in the mid-1860s, Nobel moved his explosives production to this idyllic site on the fringes of the Swedish capital – its denizens had enough urban neuroses without the extra health and safety issue of a nitro factory.

Today, as deep cold bites in and snow consults its schedule, lone joggers race over the Vinterviken terrain that once housed the volatile liquid. It would have been like dashing through a minefield back then.

Workers laboured on Nobel’s products in small outlying huts. Individual teams were small so as to reduce the death toll from shop floor mishaps – for they earned the wages of fear.

Vividly dramatised in Le Salaire de La Peur, Clouzot’s 1953 film, the transport of nitro is a dangerous task, and this creates distribution problems.

Delivering explosives
Nobel needed a safer way of producing and delivering explosives – the snaking rail- roads of Europe and the US yearned insatiably for nitro as 19th-century man moulded the planet to his will, blasting through mountains and hills for the mechanical horse.

A creative industrialist who ended up holding over 300 patents, Nobel bonded the nitro with a type of sand to form a paste. When he rolled this into a candle and wrapped it in paraffin-soaked paper, the stick of dynamite was born.

Forget Ingmar Bergman’s existential dramas – where would Loony Tunes and Road Runner cartoons be without this Swedish plot device?

Nobel made an immense fortune from nitro, dynamite and gelignite – and more again from his brothers’ offshore oil explorations. But two events marked him deeply.

One was the death of his younger brother from a nitro accident in 1864 and the other was his horror at reading his own obituary while still alive. His brother, Ludvig, died in 1888. Due to an error in the edi- ting process of a French paper, the death was written up as Alfred’s. The text called him a merchant of death and described him as having created wealth from a tool for killing.

Something detonated within Nobel’s mind and heart, its blast leaving him with sudden clarity. Before he died eight years later, he gifted most of his wealth to the foundation for which he is best known: that which awards Nobel prizes in physics, chemistry, medicine, literature and peace.

A certain syndrome
The famous 19th-century Swede’s shift from danger to peace has a late-20th century parallel. A few miles from Vint- erviken is Stockholm city centre. Think of another industry as dangerous as dynamite. It revolves around counting a similarly volatile substance: money. One day in 1973, a small- time gangster, Jan-Erik Olsson, robbed the Kreditbanken in Norrmalmstorg square. What ensued was a six-day, hostage- fuelled stand-off that ended in abject criminal failure and easy capture.

In the subsequent trial, hostages spoke of their positive experience of Olsson and of his essential kindness. What do we call their counter-intuitive cognitive process? Stockholm Syndrome.

The ultimate example of Swedish contradiction may be the Swedish model itself. From an apartment perched on a large rock overlooking Gröndal, the dynamite factory is almost visible. A father and son violently strike a drum kit by a second-floor balcony. The precise industrial beat of snare and bass bangs out towards the birch, oak and pine trees below. That famed Swedish model can be a curse, both say.

Their liberal society is feted as a western exemplar, but behind it lurk the usual conflicts of racism, privatisation mishaps and other ills. And the pints are really dear.

Debtors’ prison
It is Friday night. The atmosph- eric Bysis building and courtyard in Söder house a bar called Häktet (jail). In the 19th century, just as Nobel was amassing wealth, Bysis was a debtors’ pri- son, then it became a penitentiary for hysterical women.

The wailings of these incar- cerated unfortunates grew louder, spilling out and perturbing the beautiful Stockholm calm. In an early triumph of the Swedish model, a solution was found: the courtyard and hold- ing rooms were soundproofed.

The wailing was contained and social tranquillity was restored – but too early to qualify for the Nobel peace prize.