‘We were stuck in the wrong place with the right people. It’s miraculous’ 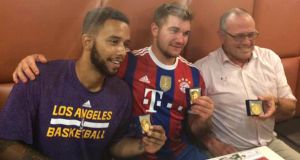 Anthony Sadler (left), Alek Skarlatos (centre) and British man Chris Norman after being awarded the medal of the city of Arras the day after they apprehended the suspect in a shooting on a Thalys train at Arras train station in Arras, northern France, August 22nd, 2015. Photograph: Frederic Leturque/Twitter

A British consultant has described how he helped three young Americans overpower a gunman on a train in France.

Chris Norman (62), was travelling from Amsterdam to Paris aboard the high-speed Thalys train when the heavily armed man opened fire.

Mr Norman, who lives in France, told reporters he was sitting in the same carriage as the Americans when they heard a shot, ITV News said.

Two of the men, off-duty military personnel, overpowered the man and grappled him to the ground. One was seriously injured as they subdued the gunman.

The suspect is a 26-year-old Moroccan, and anti-terror police are leading the investigation.

French authorities said three people were injured, two of them seriously - one with a gunshot wound, the other a knife wound.

The two men confronted the gunman after they heard him load a weapon in a toilet cubicle.

Spencer Stone and Alek Skarlatos, a member of the US National Guard, from Oregon, subdued the man as he held an automatic weapon, before a third American, Anthony Sadler, and Mr Norman joined them to help.

Mr Norman told reporters in France: “I saw a guy carrying an AK-47, or at least I assumed it was some kind of machine gun, anyway.

“We ended up by tying him up, then during the process the guy actually pulled out a cutter and starting cutting Spencer.

“He cut Spencer behind the neck, he nearly cut his thumb off too. Spencer held him and we eventually got him under control. He went unconscious, I think.”

Mr Stone’s friends praised his quick reactions and bravery in being the first one to approach the gunman, saying he helped save the life of another man who was bleeding profusely from the neck, despite being injured himself.

Mr Skarlatos said: “Spencer ran a good 10 metres to get to the guy and we didn’t know that his gun wasn’t working or anything like that. Spencer just ran anyway and if anybody would have gotten shot it would have been Spencer for sure and we are very lucky that nobody got killed, especially Spencer.”

Mr Sadler, a US student, added: “I’m just a college student, it’s my last year in college, I came to see my friends on my first trip in Europe and we stopped a terrorist, it’s kind of crazy.”

They said Mr Stone was “in good spirits” and “doing great” as he recovers in hospital.

Mr Norman and the two uninjured Americans were awarded a bravery medal from the local mayor for their heroics.

The White House also praised their actions as having helped prevent “a far worse tragedy”.

Mr Stone is a member of the US Air Force stationed in the Azores, and Mr Skarlatos (22), had returned from a deployment in Afghanistan in July with the National Guard, his stepmother Karen Skarlatos said.

She told BBC Radio 5 Live that she was not surprised by his bravery as he is “big, strong and courageous”.

Ms Skarlatos said he called her in the immediate aftermath and sounded “very intense”, and she knew he had been involved in “serious business”.

French movie actor Jean-Hugues Anglade, star of international hits Betty Blue and Nikita, who was also on the train, was quoted as saying by BFMTV: “We were stuck in the wrong place with the right people. It’s miraculous.”