Assembly votes to renew deployment of French forces in Iraq 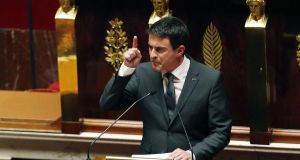 French prime minister Manuel Valls delivers a speech during a special session of the national assembly to pay tribute to the 17 victims killed in Islamist attacks. Photograph: Francois Guillot/AFP/Getty Images

In his homage to the 17 men and women killed in Islamist attacks last week, French prime minister Manuel Valls spoke of “an ardent flame” and “the spirit of January 11th,” referring to the march by 3.7 million French people on Sunday.

“Stay faithful to the spirit of January 11th, 2015,” Valls exhorted the National Assembly.

The attacks which claimed the lives of 17 people last week have transformed France, at least temporarily. In the past, right-wing deputies drowned out Valls’s speeches with booing and heckling.

Yesterday, left and right sang La Marseillaise together for the first time in nearly a century. They gave Valls three standing ovations; when he praised police, the armed forces and interior minister, and at the end of his passionate ode to secularism and tolerance.

He specifically mentioned the threat from accomplices of Cherif and Said Kouachi and Ahmedy Coulibaly, last week’s killers. “I have friends but if they have committed crimes I cannot be held responsible for that,” Fritz-Joly Joachin, a Frenchman detained in Bulgaria told a judge. Joachin was allegedly in contact with the Kouachis.

The Assembly voted by 488 to one to renew the deployment of French forces who are bombing Islamic State targets in northern Iraq. Valls said the Iraq vote “is also our response to terrorism.”

More than 1,250 French intelligence officers work on Iraq-Syria alone, not counting those assigned to the Sahel, Yemen, the Horn of Africa and Afghanistan-Pakistan, he said.

The prime minister gave the interior minister eight days to propose measures to prevent the internet and social networks being used by Islamists to make contact with, enlist or teach extremists.

Valls called on the European Parliament to lift its objections to the Passenger Name Record system, which some fear threatens civil liberties. He said the penitentiary system will increase intelligence activities, and that the work of imams in prisons will be watched more closely.

“We must have at our fingertips the names of all convicted terrorists, know where they live, when they are present or absent,” Valls said. Former convicts or those who have participated in “terrorist combat groups” will be required to declare their residence and check in regularly with police.

Valls spoke emotionally of France’s Jewish community. “How can one accept that in France . . . which was 70 years ago the place of [Jewish] martyrdom, one hears shouts of ‘death to Jews’ in the streets?” he asked. “Without Jews, France would no longer be France.”

It was unacceptable that in certain schools, teachers are unable to teach the Holocaust, he added.

Extremism among French Muslims “is not a debate between Islam and society. It’s a debate that French Islam must hold within itself,” Valls said.

The prime minister told of a Muslim friend who wept in shame at the attacks. “I no longer want a France where Jews are afraid or Muslims feel ashamed, because we are a fraternal Republic,” he said.