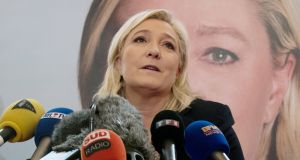 France’s mainstream political parties were scrambling for a way to stop the rise of the far-right National Front (FN) yesterday after it took a historic first-round lead in regional elections. Boosted by the fear which followed Islamic State attacks that killed 130 people in Paris on November 13th, Marine Le Pen’s party secured 27.7 per cent of the vote nationally.

It came first in six of 13 regions in Sunday’s vote, its best-ever result. The anti-Europe, anti-immigration party has been gaining ground for years among voters fearful of unemployment and immigration and disillusioned by mainstream politics.

Riding a wave of Euroscepticism and anti-immigrant feeling, which has brought far-right parties to prominence across Europe, the breakthrough bolsters Le Pen’s position as a serious contender for the 2017 presidential election.

Some 16 per cent of those who voted for the FN said they had changed their voting intentions after the attacks, an exit poll published yesterday said.

Sixty-eight per cent said their aim had been to punish the unpopular Socialist government of President François Hollande, the poll said.

The outcome also exposed faultlines within both the country’s main traditional political groupings over the right tactics to confront the FN in the decisive second round of the regional elections next Sunday.

But many Socialists are unhappy about giving up all representation across swathes of the country, and yesterday Jean-Pierre Masseret, who leads the party in the eastern region, resisted calls to pull out.

“We are standing fast. We think the best way to oppose the National Front is by taking our seats in the regional assembly,” he said.

Sarkozy has ruled out a similar tactic by his own party, but some of his allies say he should copy the Socialists’ move.

“When you are third, you pull out. You create a front against the destructive force because now is the time to rebuild,” said former prime minister Jean-Pierre Raffarin, from the centrist rank of the party.

Long the pariah of French politics, the FN has won greater respectability since Ms Le Pen took over from her father, Jean-Marie Le Pen, as head of the party in 2011.

Ms Le Pen, who is attributing her party’s historic gains to a people’s revolt against the political elite, was careful not to claim victory. She also denounced the Socialists’ tactics as anti-democratic.“To pull out a candidate on the second round is rather unfair. Today, they’re twisting the arm of the French, of the left. Are they going to accept being insulted, despised? We’ll see,” she said. – (Reuters)