France’s 6,000 aristocrats struggle to slow the erosion of their traditions 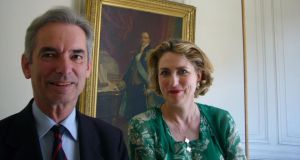 Pierre-Louis and Sabine de La Rochefoucauld, Duke and Duchess d’Estissac, with an ancestor. “Throughout Europe there are families like ours. I especially admire the Habsburgs. They’re the most fervent, almost mystics.” Photograph: Lara Marlowe

Because he was grand master of the royal wardrobe, the presence of François Alexandre Frédéric de La Rochefoucauld was required when Louis XVI dressed in the Palace at Versailles. One morning 224 years ago – some accounts place it before the storming of the Bastille, others immediately after – the king asked de La Rochefoucauld if it was true there was a revolt in Paris.

“No, majesty. It is not a revolt; it’s a revolution,” de La Rochefoucauld replied. He was the first to define the founding event of modern French history.

No notice
De La Rochefoucauld’s grandson, nine generations removed, Pierre-Louis de La Rochefoucauld, duc d’Estissac, lives a block away from the Champs-Élysées, where the French republic will celebrate its revolution tomorrow. This year, as every year, the duke, aged 65, will pay it no notice. “We had to run away, hide or get killed,” he says. “It’s not a date I want to remember.” The family has proof of its lineage for the last 1,000 years, back to Foucaud the 1st in 1019. In the 17th century, François VI, duc de La Rochefoucauld, became a famous writer of maxims and memoirs, whose pithy observations on human folly are still quoted today.

Some 15 de La Rochefoucaulds were guillotined in the revolution. The present-day scion has a special fondness for Pierre-Louis de La Rochefoucauld, Bishop of Saintes. “Because I bear his name, I feel close to him.” The duke never passes the intersection of the rue d’Assas and Vaugirard without thinking of his namesake, who was detained in a Carmelite chapel there with 150 other clergy on September 2nd, 1792.

“They were ordered to recognise the new status of the church under the revolution,” the duke recounts. “All of them said No. One by one, they were shoved into the garden where dozens of ‘patriots’ fell upon them, killing them with hammers and knives.”

Pierre-Louis de La Rochefoucauld was declared a blessed martyr in 1920. He would have been canonised, the duke believes, had the church not been intimidated by the government. “In France, the legal government considers that the revolution was a marvellous thing,” he says bitterly.

There are fewer and fewer practising Catholics in France, the duke admits. “If you go into a church, you see people like me. Chivalry was the basis of the old nobility, and the Catholic faith is the basis of chivalry. Throughout Europe there are families like ours. I especially admire the Habsburgs. They’re the most fervent, almost mystics.”

The duke is “not at ease” in street demonstrations, but he nonetheless marched twice last winter, against the law that legalised same-sex marriage. The demonstrators were “happy and sympathiques, but I was horrified by the behaviour of the police”.

The socialist education minister Vincent Peillon holds a doctorate in philosophy, and published a book, The French revolution is not over, in 2008. Peillon is a bugbear of religious conservatives, who accuse him of wanting to abolish gender differences and impose his “atheist ideology”.

The duke sees the present government as modern-day Jacobins. “Peillon says ‘we’ when he talks about the revolution. He believes that as long as the Catholic Church exists ‘we’ will not have won entirely,” he explains.

The duke “worked in property”. His wife, the duchess Sabine, does public relations for the Louvre. Their name has been an advantage in those professions. Many French people, for example around the family château at Combreux, respect their role in history, he says. Others are hateful, like the jealous colleague who once told his wife, “I thought they guillotined you all in the revolution.”

France’s surviving 6,000 aristocrats struggle to slow the erosion of their property and traditions. The duke goes stag-hunting often, in the forest of Orléans. Nearly every year, he says, he and fellow hunters have to stave off some draft law seeking to ban it.

‘Closed circle’
The duke’s father was president of the 1,200-strong, all-male Jockey Club, which Marcel Proust described as the most closed circle in the world. Liveried servants still address members by their titles. “We have a principle; one doesn’t come to the Jockey to do business,” the duke says.

Unlike the British aristocracy, French nobles have largely shunned commerce – and marriage outside their milieu. “The Anglo-Saxon expression, ‘to make money’ – I find it horrible, horrible. And I am not alone.”

He particularly objects to fortunes amassed in finance, because it produces nothing real – probably the only sentiment he shares with president François Hollande.