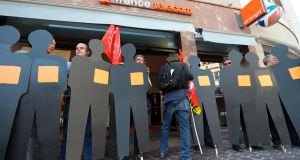 France Telecom employees demonstrating in Strasbourg, eastern France, in 2009. In all, 60 France Télécom employees took their own lives, including 35 in 2008 and 2009. Photograph: Frederick Florin/AFP/Getty Images)

Seven executives from France’s largest telecommunications company may face criminal charges over a company strategy alleged to have driven at least 35 employees to suicide in 2008 and 2009.

The deaths have become a symbol of the dark side of globalisation and the digital revolution. They occurred as publicly-owned France Télécom, now Orange, was privatised while attempting to integrate new technology in a highly competitive market.

In October 2006, then CEO Didier Lombard told executives he wanted 22,000 of the company’s 110,000 employees to leave within three years, and another 14,000 to change positions. At the same time 6,000 younger, more tech-savvy recruits were to be hired.

Retructuring programmes were called “Next” and “Act”, in English.

“I’ll make them leave, one way or another, through the window or out the door,” Mr Lombard said at the time.

According to the Paris prosecutor’s 193-page requisition, which was signed on June 22nd but revealed publicly on Thursday, some 4,000 France Télécom executives were trained each year to “make people move” by exerting maximum pressure.

Cadres received bonuses proportionate to the number of employees they forced out. Methods included assigning working mothers to jobs two hours from their homes or ordering employees to take on new duties for which they were not trained. Some were offered jobs that were clearly inferior to the positions they had held.

It worked. In July 2009, a technician in Marseille spoke of “management through terror” when he took his own life. In 2011, an employee burned himself alive in the company parking lot in Mérignac.

A technician called Robert (51) was forced to become a salesman. “He was afraid he couldn’t do it. He couldn’t sleep. The job killed him,” his companion told investigators.

The SUD-PTT union filed a lawsuit against the company for “endangering lives” through “extremely brutal management methods” in 2009. A seven-year investigation began, based on thousands of emails, power points and the testimony of dozens of employees.

The CFE-CGC union wants the executives to face trial for manslaughter and endangering lives, as well as moral harrassment.

SUD-PTT said it will continue fighting against “financial logic pushed to the extreme”.

The communist CGT said a future trial “must be a warning to all companies in the telecommunications sector who make shedding jobs the alpha and the omega of their strategy, in the name of profit and to the detriment of their employees’ lives.”

If France Télécom is charged with “moral harrassment” as a “moral entity”, as the prosecutor wishes, it will be the first such trial for a major French company.

Four other executives, including two women, are under investigation for “complicity in moral harrassment”.

Of the seven, two have left the successor company Orange but occupy prestigious posts elsewhere. Two have retired and three are still employed by Orange.

The executives and their lawyers say the projected figures for job cuts were “indications” rather than “goals”, and that they were trying to save the company. France Télécom must not become the scapegoat for a problem that touches all of French society, they add.

Claudia Chemarin, a lawyer for the Orange group, told France Info radio the company “contests having put in place a procedure intended to destabilise employees”.