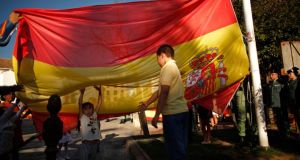 Children hoist the Spanish flag during a flag-honouring ceremony on the eve of the Spain’s National Day. REUTERS/Jon Nazca

Spain celebrates its national day today, marking Columbus’s arrival in the Americas in 1492, an historic event that would see the country’s influence spread across the world. Yet during this year’s October 12th festivities, the fragility of Spain’s own territorial unity, rather than its status as a global power, will be in people’s minds.

A push by nationalists in the northeastern region of Catalonia to break away from Spain after a referendum on the issue next year has dominated the country’s politics for months.

To counter that campaign, groups opposed to independence have planned a demonstration today in Barcelona’s emblematic Plaça de Catalunya. The date is no accident. The organisers, civic group Som Catalunya, Somos España (We are Catalonia, We are Spain) have declared “Now, more then ever, it is crucial to celebrate the national day of Spain to strengthen the ties that unite Catalans with other Spaniards.”

The demonstration will have the support of a handful of political parties, including the Partido Popular (PP), the conservatives who govern Spain and are resisting the proposed independence referendum on the grounds it is unconstitutional.

Today’s event is not expected to be nearly as big as a “human chain” that pro-independence activists and parties held across Catalonia last month. However, the build-up has been laced with logistical and political disputes, showing how far off a consensual solution appears.

Fascist hijack
In recent days, the Falange, a fascist party that backed the four-decade dictatorship of Francisco Franco, has distributed flyers supporting the Plaça de Catalunya demonstration. Mainstream opponents of Catalan independence fear their message is in danger of being tarred by extremists.

Yesterday, deputy prime minister Soraya Sáenz de Santamaría appeared to acknowledge as much as she called for “respect and good judgment” during the day’s festivities. But the tension in Catalonia has also been highlighted by the main political parties’ failure to agree unanimously on a public condemnation of the planned actions of extremists today. The PP refused to put its name to the condemnatory text because it disagreed with details.

And even one of Spain’s world-beating soccer players has been dragged into the increasingly bitter political arena. Organisers of today’s demonstration used an archive video of Barcelona midfielder Andrés Iniesta, talking about how he feels both Catalan and Spanish, to publicise the event. But the video was removed from the internet after it emerged that Iniesta, from the south of Spain, had not authorised its use. “Mixing sport and politics never works,” he said.

While Prime Minister Mariano Rajoy has been seen to take a tough line against the separatists, his party colleagues in Catalonia itself are treading somewhat more softly.

Yesterday, the Catalan PP launched its “We are 47 million” campaign, a reference to the population and an effort to persuade Catalans to stay part the country. The move is an echo of British political parties’ “Better Together” campaign to counter Scottish separatism.